So what good’s an adventure if the story doesn’t roll on into the next one? What good is winning the battle while the war rages on? And how can real heroes keep the world safe when the position of the world’s guardian remains empty?

The NetherWar is upon us, to answer these questions. 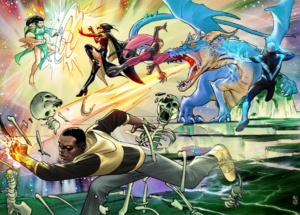 NetherWar is a six-part adventure series for Mutants & Masterminds—five main stories and a prequel—that pits the heroes against the rising tide of evil magic on Earth Prime. The champions must prove their mettle by defending the world from newly-empowered villains and uncovering the legacy of protection Adrian Eldrich created before his terrible death. But they’re racing the clock as a diabolical shadow from the Master Mage’s past works to unravel those protections and rise on Earth-Prime as a dark god!

Over the coming months, you’ll run through the harrowing challenges and ultimately save Earth-Prime. The adventure begins with a flashback in this week’s Master of Earth, written by me, then continues next month with John Polojac’s Assault on the Nerian Nexus. The months to come will unveil The Pentagram Peril, Broken Strings, Bound by Gold, and finally conclude in Three Made One. There’s plenty of space in between each adventure to add your own adventures and plot points, or you can run the entire series back-to-back as an extended mini campaign, and each volume of the NetherWar arc will work as a standalone adventure if you only want little a magical peril. As a treat.

You can run the NetherWar adventure arc using your existing heroes, or build a new team to tackle the crisis, but magical powers aren’t necessary to save the world from the magic apocalypse. There are plenty of expert NPCs along the way to explain the magical history of Earth-Prime and plenty of ways to solve the various challenges without resorting to spellcraft, so feel free to bring your mutants, aliens, and cyborgs into the fight!

If you do want to use NetherWar as the kickoff for a magical campaign, NetherWar offers Bequests in each adventure—tiny bits of Adrian Eldrich’s legacy as Master Mage left behind for others to inherit. Your heroes can keep bequests in their trophy case as plot devices they can pull out for a Hero Point, or invest the Power points to make any bequest a normal part of their heroic identity. And the greatest bequest of all is up for grabs: The title of Master Mage of Earth-Prime! While bequests and the title aren’t central to the campaign, they provide a little something extra for players who get into the themes and legacies involved.

A Blast in the Past

With the Time Traveler’s Codex  available now, it’s appropriate that the NetherWar kicks off with a little trip to yesteryear in Master of Earth. A slight departure from our usual Astonishing Adventure offerings, Master of Earth flashes back to events we already describe in the Secret Past chapter of Freedom City, Third Edition and further details Seven’s climactic confrontation with the Dark Lord Una to save the earth after Eldrich’s passing. The players step into the roles of Seven and several members of the teenage Next-Gen to stop Una the Unrelenting from conquering Earth-Prime! You can play the adventure as a slice of history with the same outcome, or use the adventure with your own heroes to create your own spin on Earth-Prime’s recent past. While the heroes of Master of Earth—are set years in the past—don’t necessarily tie directly into those you might play, the adventure with help players understand the status quo of Earth-Prime’s magical community and how we got here.

Your Guide to Adventure! 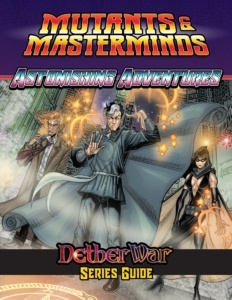 NetherWar has a lot of moving parts and expectations, not to mention six parts stretched out over as many months. To help players and Gamemasters alike keep track of all those moving parts, we’ve assembled a FREE NetherWar Guide. This 15-page guide gives players the rundown on what they need to know and expect going into NetherWar as well as advice on what skills, Advantages, and powers might be helpful. If you’re building your team from scratch for this adventure series, it also offers five team ideas and five concept roles to help you define your place in the group. You can build your teams only using these concept roles, or combine them with roles presented in the SuperTeam Handbook to flesh out your place on the team and the story.

For Gamemasters, the NetherWar Guide also includes a section just for you! It includes an adventure-by-adventure preview of what to expect so you can start early seeding any plot points you really like. It also includes a brief who’s-who of NetherWar villains so you can read up on their history and start perfecting your voice-acting skills for the table!

If you’re worried about magical mayhem overload, don’t fret! We’ll have plenty of Astonishing Adventures to come that offer some mystical relief! Take off to the stars, battle aliens, and stop a supernova in the cosmic adventure Prodigal Sun, or take your campaign back to high school for a LARP gone terrible wrong in Bite Club, or confront a mischievous cosmic imp as you journey Into the Idiot Box! All these and more lie in the future!

The NetherWar has been a really fun project to bring to life, and I hope everyone has as much fun playing it. Hopefully this will be the first of many multi-part adventures yet to come for Mutants & Masterminds, so let us know what you think on social media and the Ronin Army forums!