Once the summer convention season is largely completed but before we lose the momentum that meeting our fans and fellow gamers brings, Green Ronin holds its annual summit in the Seattle area to plan out what we hope to bring to market for the next year. Summit time is important to our company because everyone at Green Ronin works remotely, bringing their individual skills and unique talents to bear from their own home offices around the country.

2017 means it’s been 17 years of our little endeavor that began as a way for GR President Chris Pramas to keep his hand in roleplaying while he worked a day job in the fledgling miniatures division at Wizards of the Coast circa 2000. Considering how we work, with so many of us working in what might seem like isolation, I’m amazed and gratified at how stable the core of our team has been and how we’ve managed to grow ourselves to include so many ridiculously talented and patently wonderful people.

When we first started it was just me and Chris, though our pal Hal Mangold was involved from project #1 and our dedicated webmaster Evan Sass followed up not long after. Hal went on to become our business partner in the reconstituted Green Ronin Publishing LLC and if you’ve listened to my bit on the recent installment of Ken and Robin Talk About Stuff you know the high regard in which we hold him. The fact that they were, 16 years ago, the Best Man and Dude of Honor (respectively) at our wedding in 2001 should only be further evidence of our fond ties to these men.

I mention this because I consider “our people” to be not just coworkers and colleagues but also friends, near family. Summit time, in addition to being very much a working retreat where we meet for serious discussion and strategy for 8 or 9 hours each day, is also akin to a family reunion or some other sort of social gathering. We cook together, eat together, play games and watch movies and relax together. It’s bonding time… not “enforced bonding” or corporate ice-breaker game playing, but letting our introverts introvert, letting people who love the Teenage Mutant Ninja Turtles nerd out together, letting the night owls night owl and the early birds fix breakfast. It’s bonding time, time that reminds us all that our coworkers are humans and not just words in an email or posts to a Slack channel. 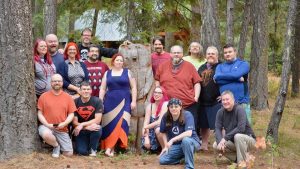 This year was kind of a big year for us because we reached a threshold where the number of “newbies” who had been to one (or none) of our summits in the past were nearly equal to the “old timers” who have now been to several (or every) previous summit. This year we welcomed Mutants & Masterminds line developer Crystal Frasier, who had the poor luck to be hired just after last year’s summit and so who had to go a full 11 months working for us without the experience of summitting to bolster her. Similarly, our magnificent Modern AGE line developer, Malcolm Sheppard, also had to wait through many months of work before meeting most of the rest of the team this year. After a full decade of waiting for Green Ronin to be in a place to launch a fiction line, 2017 was the year we were able to put our plans in motion and that meant that our Managing Editor Jaym Gates joined us for the first time this year as well. We also welcomed Veronica Templar, who graduated from volunteer to Event Coordinator when Donna Prior moved on. Veronica had, at least, met most everyone through her volunteer work for us as booth staff for GenCon but it was still her first summit in an official capacity (and she was dealing with an icky virus of some sort to boot). Finally, our Lost Citadel developer, CA Suleiman, joined us for summit business as well, though he did have the advantage of having worked as a Green Ronin freelancer before and knew at least a few of us before we dragged him out into the wilds of Eastern Washington to extract summit work out of him.

If there’s any indication that big things are afoot, looking around and seeing that a full 1/3 of your company summit is made up of new blood is certainly that.

Every year I leave the summit feeling energized and excited to tackle the upcoming year and this year was no different. If anything, I’m more excited than usual because I’ve gotten to see what Malcolm has been cooking up for our Modern AGE release and that in addition to our upcoming Mutants & Masterminds releases we have the wonderful work Crystal has put into the Lazarus setting. The line-up for Nisaba fiction is exciting me beyond words because as I’ve said, I’ve wanted to do this fiction line for a decade and Jaym is the PERFECT person to handle it for us. The Lost Citadel project was my “special project” last year and seeing it come into its own inside the company through CA’s capable guidance makes me nearly as happy as seeing Blue Rose make it out into the world did this year. Veronica blows me away with the things she’s taking on to up our convention presence and reboot the Freebooter volunteer program.

2018 holds much promise for Green Ronin and we have a really dazzling array of things planned. In addition to the new initiatives from our new faces, there are many things planned from our tried and true stalwarts as well. Chris will be along in the future to talk more about the specifics but I’ll just say that at the summit everyone was given a chance to pitch a “special project”…something done out of love or passion or inspiration. These are longer-term plans and ideas that Jack Norris, Joe Carriker, Steve Kenson, and Chris himself will elaborate on in future Ronin Roundtables. The most important part for me was that every idea had an advocate, that there was at least one person truly excited and inspired about every single “special project” to hit the table… and if circumstances keep us from doing them all right now, I definitely don’t want that to hold us back from making time to do them in the future. Nothing sells me quite as much as genuine passion for a project and the summit offered that in spades.

I am utterly convinced I work with the best people in all of gaming. That’s what Summit Time means to me and it’s one of the reasons I’m still in this business after 28 years. I hope you all come to love what we’ve got cooking as much as I do!