After 22 years in business, the Green Ronin warehouse is looking a little crowded. With reprints and new products incoming, it’s time to make more space! These deals are for print products only. With limited stock and priced to clear some pallets, this is a screaming deal (75% off!) you don’t want to miss. With that, we offer you the LAST CHANCE WAREHOUSE SALE!

Please note the sale does not extend to shipping, and shipping fees are determined by the carrier. 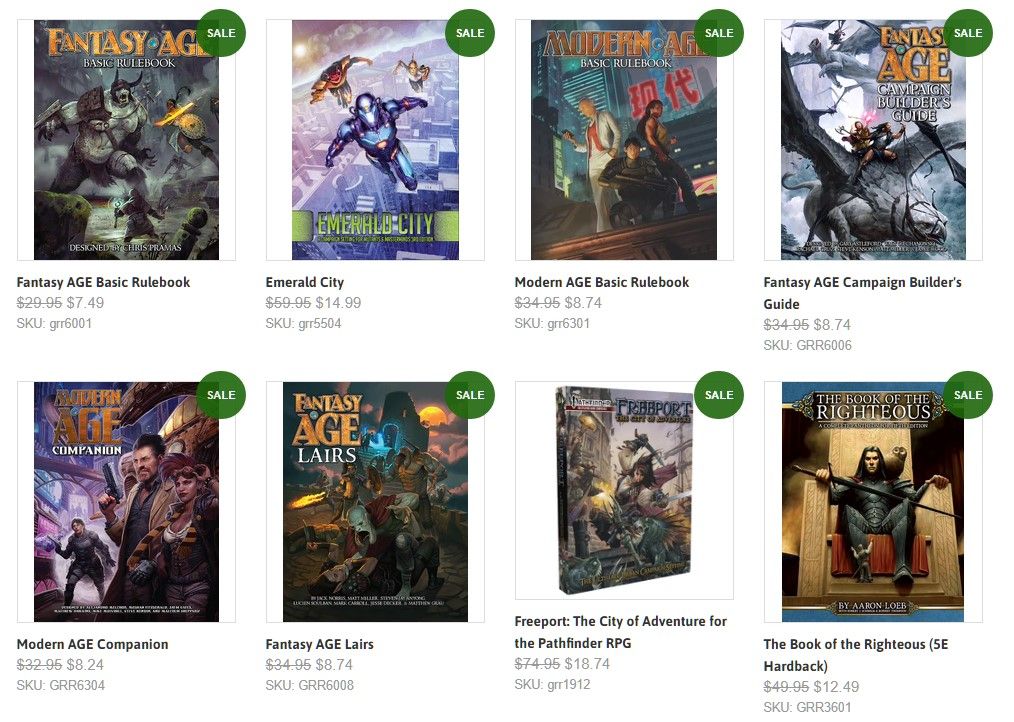 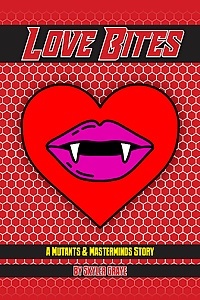 Happy Valentine’s Day (or happy Friday if that’s not your thing) from all of us at Green Ronin! We are pleased to present you with Love Bites, a free Mutants & Masterminds novella by Roadtrip to Ruin author Skyer Graye.

Things have a tendency to go wrong around privileged Twy and the whirlwind of violence that is Bess. But can they hold it together for one fancy date at the hottest eatery around, on the most romantic day of the year? Probably not, but as they say, it’s how you respond to adversity–or the bar fight your girlfriend starts because she’s bored–that defines your character. And these two certainly have plenty of that. Author Skyler Graye introduces two of the heroines of the upcoming Roadtrip to Ruin novel, setting the stage for the rollicking adventure set in Green Ronin’s Mutants & Masterminds superhero setting. 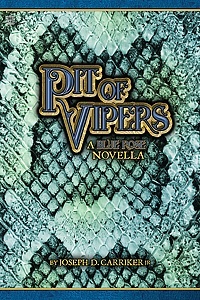 Today we are pleased to present a new Blue Rose novella, Pit of Vipers by Joseph D. Carriker Jr.

Following the events of Shadowtide, Pit of Vipers returns to the mud-choked streets of Serpent’s Haven, where power struggles and betrayal are more common than clean water. Spry Robin returns home to fulfill a promise, but finds himself in the middle of a dark conspiracy. He and Ydah will need all their cunning and connections to get out of this pit alive.

Your Pit of Vipers download will include epub, mobi, and pdf formats, all for just $4.95. 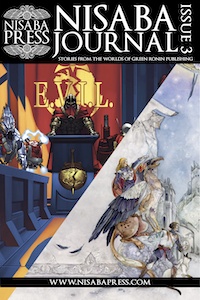 Nisaba Journal Issue 3 is now available for purchase and download. For $6.99 you get three formats: PDF, epub, and mobi.

Open the Nisaba Journal and immerse yourself in original fiction gathered from your favorite worlds. Issue 3 collects five tales from two of Green Ronin’s most popular settings—Blue Rose and Mutants & Masterminds—and offers ideas for incorporating the heroes, villains, and adventures from the stories into the ones you tell in your own campaigns.

Whoever said your lover should never change you might not have had flesh-shaping arcana at their fingertips.

“Those Who Wait, Part 4,” by Rhiannon Louve

Marn and Kiyn continue trying to unravel the corruption spreading through Aldis while dealing with their feelings for each other.

“The Price of Mercy, Part 2,” by Clio Yun-Su Davis

Family and obligation continue to clash even beyond death and freedom.

A lonely young rhydan, burdened by the expectations of his herd, finds his bonded companion, but deadly trouble is brewing.

“A Great Day for Trepidation,” by Eytan Bernstein

Kevin’s built a team, and now the bad guys are coming for them. 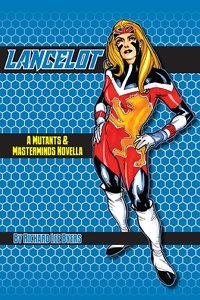 We are pleased to present a new novella for our Mutants & Masterminds line, Lancelot by Richard Lee Byers!

The new hero is very helpful, assisting Britannia in putting down rampaging dinosaurs, and helping her rescue hostages. But as two nations escalate a simple question of borders into threatened war, their respective patriotic heroes come into conflict as well, and someone seems to be fanning the flames. Britannia finds herself questioning what this new hero’s purpose is, and who her allies really are. It will all come to a head over the Atlantic Ocean, as hero battles hero, and treachery is afoot. 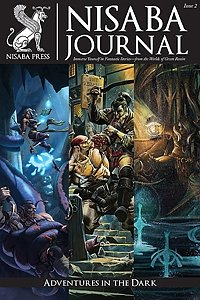 Today we have for you the second issue of our fiction magazine Nisaba Journal: Adventures in the Dark.

Open the Nisaba Journal and immerse yourself in original fiction gathered from your favorite worlds. Issue Two collects seven tales from three of Green Ronin’s most popular settings—Freeport, Blue Rose, and Mutants & Masterminds—and offers ideas for incorporating the heroes, villains, and adventures from the stories into the ones you tell in your own campaigns.

“The Mermaid and the Maelstrom,” by Andrew Penn Romine

She was cast away on a forgotten island, but the hope of rescue brings a confrontation with an old enemy.

“The Price of Mercy,” by Clio Yun-su Davis

Seeking answers, a young woman and her rhy-horse venture into the forest, and encounter an unexpected ally.

“At the Speed of Screwed,” by Andrew Wilmot

All she wants is to be left alone, but that’s not in the cards. Can she hold her ideals, or will Emerald City see the rise of another villain?

“Searching the Shadows,” by Dylan Birtolo

Foul plots choke Freeport, and an unlikely pair of uneasy allies must find the source of the evil.

“The Heart of Things,” by Rhiannon Louve

The Rose Knights draw closer to the source of the shadowspawn plots, but enemies lurk in unlikely places.

“One Night in Freeport,” by Richard C. White

He thought he was getting away with murder, but tonight, he’s not the hunter.

Hired to protect a notorious witch, a gunslinger finds herself caught in the midst of a bargain gone awry.

In case you missed them, we have quite a bit more fiction to choose from as well. Nisaba Journal Issue 1 is of course also available, and features six terrific tales, also set in the worlds of Freeport, Mutants & Masterminds, and Blue Rose. Tales of Freeport: Dark Currents includes three stories set in the City of Adventure. Shadowtide, by Joseph D. Carriker, Jr., is our first novel, from the rich setting of the Blue Rose RPG. And there’s more where those came from. 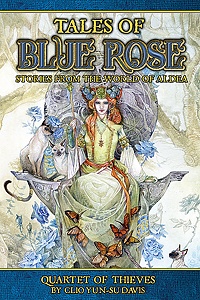 A young woman travels far from home to deliver an important letter but must band together with a boy thief, his rhy-fox companion, and a caravan guard to steal it back when it gets taken by a criminal organization.

This Tale of Blue Rose can be yours to read in your choice of PDF, epub, or mobi formats, for just $1.99. 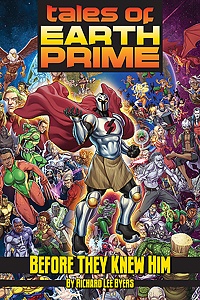 Tales of Earth-Prime: “Before They Knew Him”

This week’s new short story from Nisaba Press is “Before They Knew Him” by Richard Lee Byers, set in our Mutants & Masterminds setting Earth-Prime. It can be yours for just $1.99.

Freedom City’s strength is Dr. Metropolis’s strength. But that’s about to become his Achilles heel. 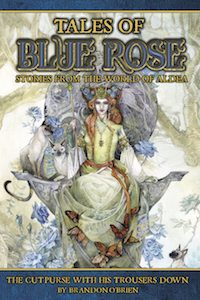 It’s story time for this week, but there’s no need to gather ’round. You can purchase this Blue Rose tale and read it at your leisure, in your choice of PDF, mobi, and epub formats, for just $1.99!

In “The Cutpurse With His Trousers Down,” a master thief sees the perfect opportunity to frame his rival, and learns that best laid plans are often the first to go awry.

Author Brandon O’Brien is a poet and writer from Trinidad and Tobago whose work has been shortlisted for the 2014 Alice Yard Prize for Art Writing and the 2014 and 2015 Small Axe Literary Competitions, and appears in Strange Horizons, Uncanny, Reckoning, Arsenika, New Worlds, Old Ways: Speculative Tales from the Caribbean, and other outlets. He is also a performer with The 2 Cents Movement, and the poetry editor of FIYAH: A Magazine of Black Speculative Fiction. 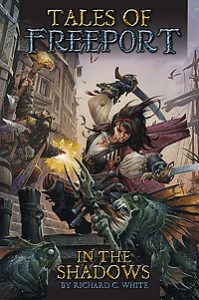