One of the pieces of advice many real-world Tarot readers give is to use the cards to tell a story. This is what makes the Royal Road such a fun tool to use in Narrating and playing Blue Rose: it’s a source to mine for inspiration when both planning and in play.

In playing a Blue Rose chronicle, each player character has a built-in subplot generator, in the form of their Calling. The Blue Rose core rulebook defines a character’s Calling as “their place in the world, their role in the grand story of life.”

To that end, while planning your story arcs, the Narrator should keep those Callings in mind to give player characters a place to “hook into” the narrative. That’s not just a stylistic thing, either: player characters recover Conviction by taking actions that are in accordance to their Calling, so part of the Narrator’s responsibility should include providing those opportunities.

We’re going to look at a way of using the Royal Road to define those opportunities. As with many of the previous “Walking the Royal Road” articles, you’ll want to make sure you have a Tarot deck (which can simply be any one of several online card randomizers), and a means of interpreting those cards to give you the maximum possibilities. The cards we use in these articles are the Shadowscapes Tarot, with art by the amazing Stephanie Pui-Mun Law, whose art has graced the covers of Blue Rose books throughout the game’s history. They also include booklets with summaries of card meanings, so we’ll be using those for our inspiration.

Method: The method for doing this involves drawing three cards, although you can use fewer or more cards if you want shorter or longer character-specific plot arcs. Essentially, each card is an “episode” in the subplot, and the character’s Calling defines the nature of the subplot. 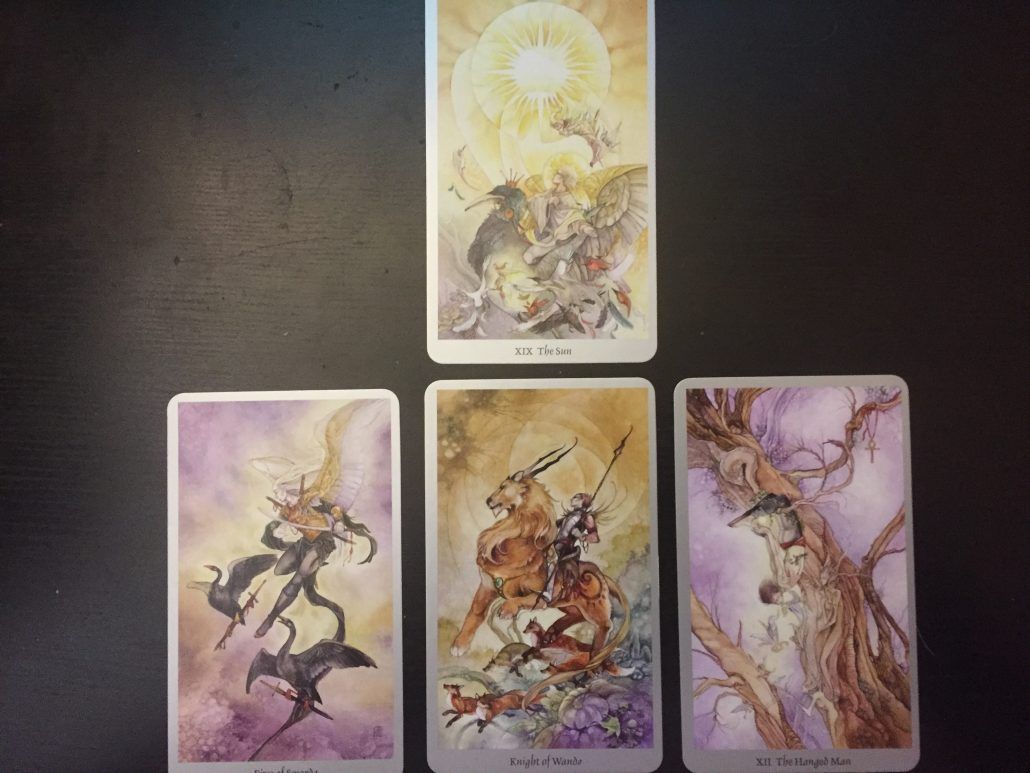 Calling: The Sun (Championing the Everyday)

This calling is perfect for the earnest if somewhat naive Dame Emelynn, a newly-anointed Knight of the Blue Rose. She herself comes from a family of poor Jarzoni immigrants, who were nearly done in by the dangers of the Veran Marsh, but were saved by an itinerant Blue Rose Knight who was her inspiration. She is now a knight herself and wants to help the common folk whose problems are often overlooked by those with the power to do something about it.

Interpretation: Discord and conflict of interests; feeling as though the world is against you, temptation to let everyone else be and just look to your own goals.

Plot: A somewhat dire card, the Five of Swords suggests a situation wherein it seems as if the good that the Calling wishes to accomplish has soured. The Narrator decides this means that some of Emelynn’s good deeds are soured by deed or circumstance. So she sets up an encounter with a bandit who is troubling local farmers, and Emelynn of course rides to help them. When she brings the bandit in to the local noble for justice, however, she discovers that the bandit is one of the Sovereign’s Finest, attempting to get his way into a nearby bandit gang. Not only is the envoy-bandit released, but Emelynn is expected to claim that he got away from her. While she is willing to do her duty, the farmers she was working to protect are bitter and upset with her for losing the bandit, and she has no way of defending herself.

Interpretation: Change and progression toward a goal; daring and passion.

Plot: After a couple of game sessions where the locals treat her as a resented failure, the envoy contacts her psychically. He knows she took a blow to her reputation, and he’s grateful for her sacrifice, and wishes to know if he can count on her continued help. He asks if she and the other adventurers she spends time with would be willing to help him win the favor of the bandits. He’s met them, but they want him to prove himself first – the noble is going to provide a wagon of “tax money” and he wants Emelynn and her friends to act as the defenders for that wagon, fighting just enough to be believable, but then fleeing. A case full of coin is the sort of thing they’ll have to return to their lair with, so he’ll know the best place for the noble to send troops to take them all at once. They accomplish this, and the noble asks Emelynn and her friends to join in the attack on the bandit lair, which they agree to gladly.

Plot: This last card is the end of the subplot, where Emelynn and her friends ride with a troop of the Aldin Guard and the noble to attack the bandit camp. Upon their arrival, they find the envoy, stabbed and near death! Her adept friend heals the envoy while Emelynn herself leads the charge, fighting the leader of the bandits (with the blood of the envoy still on his blade). In the end, her heroism saves the day, and protects the valley’s residents from the depredations by the bandits. In an effort to preserve the envoy’s cover, the noble makes known the story of how Dame Emelynn’s bandit quarry escaped, and she took a noble vow to bring not only him but all of the bandits to justice, and the locals uplift her as their hero.

Ronin Roundtable: How to Kill Everybody
Scroll to top