So, backstage, we developers have been talking about the different properties of AGE as a system, and how they might be tweaked, expanded, streamlined, and generally fooled around with. This is a conversation that builds up when it interests us, or when various projects demand it, and it’s responsible for a lot of the work we do with the Adventure Game Engine in its various forms: Fantasy AGE, Modern AGE, The Expanse, and Blue Rose—and of course these evolved from concepts devised by Chris Pramas for the Dragon Age roleplaying game. 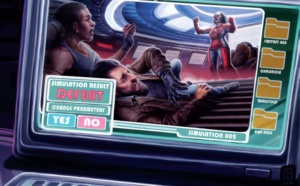 If at first you don’t get the gameplay you want, mod, mod again. From the upcoming Modern AGE Mastery Guide

The wonderful thing about this process is that everybody has their own interpretations of how and why the rules work, and this sometimes helps with creative logjams. I may have talked about how it happens before, but hey, I forgot if I did, so why not talk about it anyway in the perishable blogging medium?

Take the example of the Churn, devised for The Expanse—sort of. When I was working on the Modern AGE Companion, I got a look at the initial draft of the Churn. I liked it a whole lot, but I was also aware that as a game without a setting intended to serve a broad set of players, my “Churn” needed to generate more specific challenges from a rules perspective, because the GM couldn’t necessarily pull something from a well-defined setting. I renamed it Complications and added a bit of specificity in terms of the adversity it generates, and associated game systems like target numbers.

Then, of course, it turned out that Steve Kenson wanted to nail down the Churn a bit more. Handily, I had my draft in hand and sent it to him. So that’s how the Churn bounced between two games and came out with a redesign in both.

Another example of this is the invention of what we call breaching tests in Modern AGE and challenge tests in The Expanse: advanced tests that may have specific requirements and can impose special consequences for failure. As breaching tests, these were originally invented by Crystal Frasier for the World of Lazarus supplement, not the Modern AGE Basic Rulebook (both were written and developed at the same time). But the rules were so great I asked for them to be ported into core game systems. Steve Kenson picked it up for The Expanse, renamed it, and integrated it with the chase rules sourced from Modern AGE to streamline the latter.

However, not everything we produce makes it all the way to print or public pixels, for assorted reasons. The first is that the idea doesn’t really have a home in a new or upcoming game or supplement. They’re just free-floating notions. For example, at the time of writing we’ve just bandied about ideas for utilizing breaching/challenge tests where characters accumulate degrees of success with the ordinary combat system. Is there a place for it? Not yet, but much of the time we’ll keep these ideas in our back pockets, so to speak, until the right occasion comes up.

Then you have ideas which are great on paper but would just be too weird or dismal looking for people to get into. Here’s one I came up with. Hard Mode Stunts.

Hard Mode Stunts: Instead of setting the Stunt Die apart with a distinctive design or color than the other two of your 3d6, the Stunt Die is always the lowest die you roll. If you tie where two dice have the same number as a die with a higher result, it doesn’t matter which die you pick as your Stunt Die, since they’ll have the same value.

(Don’t know AGE? In our system we roll 3d6 + bonuses against a target number. One die is distinctive, and if any two dice have the same number on the face, that special die—called the Stunt Die or Drama Die—generates the number on its face in stunt points, which can be used to buy special effects like knocking an enemy down or getting your way with a particularly clever quip in social interactions.)

Now this seems like a logical rule. Stunt point totals tend to be high because matches happen in the set of rolls that are successes, and successful rolls will naturally be higher. With Hard Mode Stunts, you’re more likely to get fewer stunt points unless your entire roll is high—in fact, since you can’t get 6 stunt points unless 6 is the lowest die, you can only get that when you roll a natural 18 on 3d6. So logically, scales consistently, and…is no fun. In Modern AGE you might use it for the grittiest of Gritty Mode games. But AGE thrives on stunts! So, no—with one exception.

If there was a version of the AGE system that provided powerful tools to alter dice rolls or generate stunt points without relying on doubles, Hard Mode Stunts might work, with the understanding that you’ll usually be buying the big stunts, perhaps with something like The Expanse’s Fortune system. There’s a thought—but is there a place for it? Hmmm….