So, after answering some questions last week, general chatter compels me to talk about what we have planned for Modern AGE. In most cases, I’m going to talk about the current state of each release. Then I’ll answer a common question about how Modern AGE compares to its sister, Fantasy AGE.

The following things are in various stages of production—that is, the creation of a book from developed and edited text files.

Modern AGE Quickstart: It’s out! Read about it and download here!

Modern AGE Basic Rulebook (This is the core book!): This is currently going through last proof and art finalization. The advance PDF and preorders should be ready for June.

World of Lazarus: World of Lazarus is the first setting book for Modern AGE. It’s based on Lazarus, Greg Rucka’s dystopian-transhuman comic. Check the comic out (external link to Lazarus at Image Comics). This should be finished production shortly after the core. Note that project is a creation of Mutants and Masterminds developer Crystal Frasier, which is fitting, since she knows how comics and games intersect much better than I do.

Modern AGE Game Master’s Kit: This is the GM screen and reference card kit for Modern AGE. This is very close to finishing production and will be released hot on the heels of the Modern AGE Basic Rulebook and Lazarus.

The following thing happens to be text-complete, by which I mean writers have written it, and I’ve developed it, but it hasn’t entered production.

Did I just announce a new book? Yes. I’ll probably give it a proper breakdown once we reach production. When is it coming out? That’s still to be determined.

Okay, so my policy is the further something is from release, the sketchier I’m going to be about it. The following books have had their outlines approved, so I can start working with people to get them designed. They have cute code names for now.

Project Cranky (Real Name TBA): This is a utilitarian supplement for Modern AGE, not tied to any set campaign. 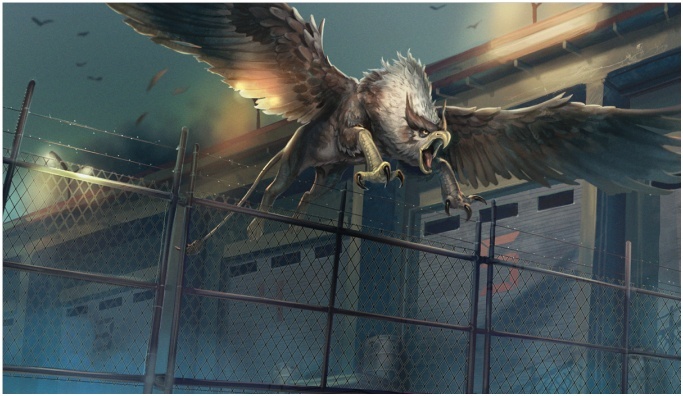 How many shows have you seen where there’s always something weird going down in the “warehouse district?” We are not about to challenge that cliché. From the Modern AGE Quickstart, available now!

So, I’ve fielded a few questions about how Modern AGE relates to Fantasy AGE. Modern AGE isn’t just a case of copying and pasting guns over swords. I’ve already talked about how it’s a classless implementation of the AGE rules, but there are several other under the hood changes. These range from Resources, the system we use to manage in-game purchases without you roleplaying getting loans and doing taxes, to Breaching, the advanced test variant designed by Crystal Frasier to support heists and capers. These demand cooperation and dramatic reversals. Crystal originally designed these for World of Lazarus, but we all agreed they were so cool they should be in the core rules. Social systems and investigations are also part of Modern AGE’s core, as is appropriate for games where characters will be deeply embedded in complex societies.

Fantasy AGE features magic as a core assumption instead of an optional extra. Certain rules emphasize the special roles of each of its classes. It has several talents not present in Modern AGE, such as Armored Training and Horsemanship, which could be used for modern games, but represented cases rare enough for me to exclude them in favor of others. Fantasy AGE’s magical Arcana can expand the range of what’s available for Modern AGE characters, and Modern AGE’s new rules might be useful for many Fantasy AGE games, but in the end they’re separate lines, with differences that in some cases, cut right down to core systems. We trust you to perform whatever creative mashups you like. I for one would love to hear about any such “FrankenAGE” games.

Too-Modern Tuesday: All the AGEs
Scroll to top Skip to content