For this Modern Monday I’ve harvested Modern AGE questions from the Ronin Army forums. Instead of just copying and pasting them, I’ve synthesized some repeated questions into stuff I can answer in one go. I also made up a couple of questions I figured you’d want answered. 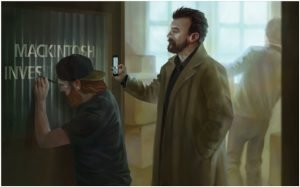 Is it a standalone game?

Absolutely. You don’t need Fantasy AGE (or any other AGE RPG) for Modern AGE. The World of Lazarus, Modern AGE’s first supplement, does require the Modern AGE core. That said, there are many useful things you might port between various games. Modern AGE’s Breaching rules, which cover capers and other complex cooperative tasks, would be interesting to apply to other AGE games, and in a modern fantasy game Fantasy AGE and Blue Rose both have elements which can be ported to Modern AGE.

Does work on Modern AGE affect other Green Ronin projects, or vice versa?

Modern AGE is one member of the Adventure Game Engine family, so naturally some folks are curious about whether work on Modern AGE affected, or will affect, releases for other games. Nope! Each game has its own line developer and writers who know how to manage their time. I did some writing for the Fantasy AGE Companion and the Titansgrave setting, but this happened during draft cycles, while writers were working, so it didn’t delay anything else. The production schedule gives it its own space. It’s all good.

Will there be cross-genre support?

Yes. This is handled in a few different ways. First, campaign mode (Gritty, Pulpy, Cinematic) can be used to fine-tune how various things work, so you can decide how action-oriented your game is. Second, the Game Mastering section devotes significant space to various genres, on their own and by historical period. This kind of “soft” support can be found throughout the game, including in suggestions on how to adapt various systems for specific genres and periods. Third, the game does have a slate of powers you may or may not choose to add to your campaign. That brings us to the next question:

Modern AGE provides detailed support for two types of powers: magical arcana and psychic disciplines. These are mechanically similar in their base treatment, but the rules include options for distinguishing them from one another. In addition, the game has a “rough draft” treatment of the sort of minor powers we often see in TV series. If you want full-on superpowers? Well we have this game you might have heard of, called Mutants and Masterminds.

How does classless AGE work?

In Modern AGE, characters are initially defined by a social class and its associated background, a profession, and a drive. These provide initial ability bonuses, talents and other traits. As you level up, you choose further ability and talent advances, along with a few other things such as specializations. You can’t improve the same ability twice in a row and will eventually incur the multiple advancement cost for peak improvements, so this prevents doubling down on Fighting, for instance. Your character’s special abilities are defined by talents and later, specializations.

How does Health work?

Your character’s initial Health is determined by profession, drive and Constitution. When you advance, further increases are based on the game’s mode. In Gritty mode, your Health doesn’t increase at all. In Pulpy mode, the increase is 1 + Constitution (minimum 1). Cinematic mode grants the full 1d6 + Constitution per level increase might know from other AGE games.

Where’s the book at?

Modern AGE has passed through initial layout, proofing and copyfitting stages (copyfitting is when we tweak the text to flow better in the layout). The advance PDF, which we release so you can get an early look (and point out typos) before we absolutely lock down the text for print, will be coming very soon indeed. After that it goes through processes to get things into print.

What About the Quickstart?

I read the forums at www.roninarmy.com regularly. I can’t guarantee I’ll answer all your questions but posting there is the best chance of putting them in front of my eyes.

I don’t know. Maybe I’ll announce a new book or something. See you then!

Jump into the Action! Modern AGE Quickstart Is Out!
Scroll to top Skip to content