Villains, can any superhero game or setting ever really have enough of them? Villains are one of the driving forces in a superhero series, since it is their schemes and plans the heroes are looking to foil, and therefore their motives and activities to call the good guys to take action. 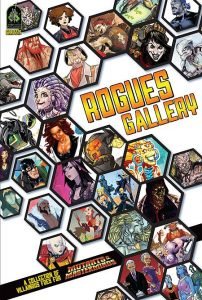 The newly released Rogues Gallery for Mutants & Masterminds (still in pre-order) is a collection of numerous supervillains for your series, ranging from powerful world-beaters to petty crooks and everywhere in between: aliens, mystics, mutants, and more. The book features the the Amalgam (with all of the powers of two of the world’s greatest heroes), the Alchemistress, and the sinister Bres the Beautiful—all foes capable of challenging an entire team of heroes. On the other end, foes like the Sportsman and Princess Poison or the House of Usher are well-suited for street-level games challenging themed crooks and criminal syndicates.

Those of you who picked up individually published villains from the Rogues Gallery PDF series will already be familiar with some of them, but the print edition offers even more, with new villains not released individually added to the book, including some updates to previously seen M&M foes, such as:

Alien-Gator was first mentioned in early notes on the history of Freedom City as a 1950s foe of the Centurion, later detailed in Freedom’s Most Wanted and now updated for the modern era in Rogues Gallery. The new Alien-Gator recognizes that the female of the species is often far deadlier than the male.

Bres the Beautiful, the powerful prince of the other-dimensional Fomorians, first appeared back in the Freedom’s Most Wanted sourcebook, and ties in with Great Britain and Europe as described in Atlas of Earth-Prime as well as Earth-Prime’s mystic history.

The Maestro, malevolent master of music, is conspicuously absent from the Crime League in the third edition of Freedom City, and Rogues Gallery explains what becomes of a Golden Age villain who makes a literal deal with the Devil.

Megastar is another character from earlier editions of Freedom City, originally a young hero and member of the teenaged Next-Gen. His story in Rogues Gallery—following the events of the Silver Storm and the Emerald City Knights series and the creation of the Argents detailed in The Cosmic Handbook—shows that not all heroes manage to stay heroes forever.

… and that just scratches the surface of the characters Rogues Gallery has to offer! Like any good villain book, it is more than just a collection of bad guys and stat blocks, but also a source of adventure and story ideas driven by these various villains, enough to fuel your M&M series for quite some time to come. So whether you are a long-time player or Gamemaster interested in the latest dubious double-dealings of the Earth-Prime setting, or someone new to Mutants & Masterminds looking for some ready-made villains for your heroes to fight, Rogues Gallery has something new for you!