If you’ve been following Mutants & Masterminds news the last few months, you’ve probably heard me talk way too much about Danger Zones. I refuse to apologize for my weird love of maps, but this time around, as the products finally take their first steps into the world, I’m not just going to blather on yet again about how much fun it can be to add set piece elements to your superhero fights based on where they happen and how they can really mix up and add interest to your adventures.

Instead, let’s talk about how you can mine cool maps for adventure ideas. 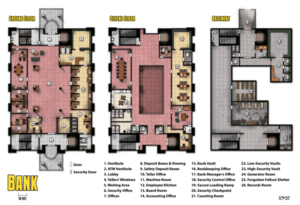 So here’s our Danger Zones: Bank map, a pretty standard savings & loan based loosely on a few real locations. Like any good comic book bank, you’ve got a large lobby full of pillars for a superhero fight, some safety deposit boxes for secret documents, and a comedically oversized vault in the basement, no doubt leftover from a bygone era when banks were required to keep more cash and valuables on-hand. Villains could be after valuables, but we also have elements like a large bookkeeping office, so maybe your villain isn’t attacking the bank itself but some hapless accountant. Like a lot of sturdily built old buildings, it also has a forgotten fallout shelter in the basement, which could serve as a villains lair or the hiding place or some clue lost in 1952. I, like most people, hear “supervillains attacking a bank” and immediately think “oh, they’re after the cash,” but with something physical to work with, you can start thinking about what else goes on at a bank and how to subvert people’s expectations. 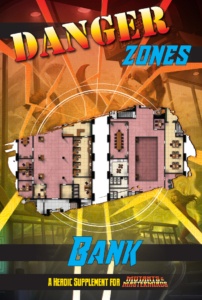 Each Danger Zone entry comes with a few suggested Capers set in that location (in this case, provided by the creative Katherine Schuttler), but here are some of my own ideas that come just from checking out the map:

Assault on the Credit Union

The heroes are caught inside the bank just as a major criminal organization begins an all-out assault. One of the bank employees has been feeding the FBI information on a major player’s white collar crime, and now all the syndicates resources—including several villains—are coming down hard hoping to wipe out the witness, the evidence, and maybe the entire building in one bloody night. The heroes can use the map and a list of the personnel and equipment in the building to come up with defense strategies and fallback locations and keep patrolling the building to make sure no one’s coming in through the windows or the loading ramp in the basement (if one of the hired villains is has stretchy powers, shrinking, or can turn into fluid, they might also have to deal with a nightmarish night deposit to kick things off). How do a band of superheroes keep a small army at bay and keep everyone trapped inside alive long enough for help to arrive?

With a map, I can track where the heroes are, where the NPCs are, and where the crooks are and decide how well each entryway is holding up to the siege, and the players can decide where they fall back to as the enemies progress.

A legendary mystical archaeologist has passed away after an improbably long life, leaving many of his greatest discoveries concealed in forgotten safe deposit boxes across the United States. The heroes need one to solve a crisis, or need to keep one out of the hands of a diabolical cult, who have already begun infiltrating the bank’s management. The heroes might stage the bank robbery themselves under temporary “villain” identities and have a confrontation with the local police or local heroes, or they might stage a quiet break-in after hours. Either way, with a detailed map, I can play up their B&E more strategically and add some drama, like a regular guard patrol or figure out where the lines of sight for police snipers might be. This could be the start to, or culmination of, a “hunted by the authorities” plotline!

A solo break-in might be better for a one-on-one session with the team’s sneakiest member, but also lets you break out all the rules for security systems in the Danger Zones text itself.

The fallout shelter in the basement looks like a great place for a villain’s lair, especially if some trash-tier bad guys move in and retreat here every time the cops or heroes start to get involved, lying low until the authorities get bored. Pack Rat and Junkpile from Threat Report are the obvious candidates, but it would be a lot more fun if there was a second layer of villainy obfuscating them. Maybe Dollface (again, see Threat Report) has an identity working in the bank and is deliberately hiding the villains’ trail and keeping them safe in exchange for retrieving parts she needs, or the Grandmaster (see Emerald City) has been manipulating the duo as unwitting knights in one of his obtuse schemes, placing obsessions into the impressionable villains then hiding them behind a respectable facade. Once the heroes discover WHO is performing these robberies, they must still track them back to their lair and decide how to approach the bank—a business unwilling to simply grant free access to strange people in masks.

There are several Danger Zones releasing this week. You can find them all in our Green Ronin Online Store RIGHT HERE, as well as on DrivethruRPG. Check back later this week and in the coming weeks, for additional Zones!