As we put the finishing touches on the Rogue’s Gallery, the Mutants & Masterminds Basic Hero’s Handbook was slowly percolating in the background. Now that it is nearly ready to ship to the printers as well, I’m happy to show the results of several months of work and writing!

Mutants & Masterminds is a great game with a robust ruleset built over 16 years and three different editions. It’s flexible enough to handle almost any genre of comic book adventure, from traditional tights-and-fights books to street-level vigilantes to cosmic weirdness to mundane human agents facing off against the unknowable. But that flexibility brings a certain amount of jargon and a learning curve that can be off-putting for new players. Among the first challenges we decided to tackle to make a newbie-friendly rulebook was character creation. The Deluxe Hero’s Handbook offers a wealth of choices for fine-tuning your character to build exactly what you want to play, but for brand new players that freedom can be intimidating. Option paralysis is one of the most commonly cited problems players new to M&M report, followed closely by the amount of number crunching character generation required. The Quickstart Character generator is a perfectly solution for intermediary players, but we wanted a solution for those picking up Mutants & Masterminds for the first time.

Our solution is the Basic Archetype, which boils character generation down to a handful of choices about your character’s theme, personality, and history. With one of the book’s eight basic archetypes and a character sheet, even brand new players can be game-ready in ten minutes!

Each Basic Archetype starts with a brief overview of the concept. Each Archetype has a base suite of Ability ranks and Defense ranks, which you can tweak by selecting a character type. Most come with a few basic skills, but ask you to decide who your character is to determine the rest. Likewise, selecting Advantages is rolled into deciding a few personality traits that help define your hero. Finally, each Basic Archetype lets you select one of three Power Suites that define what exactly puts the “super” in your super hero.

Let’s take a look at one of my favorite hero concepts: the Energy Controller: 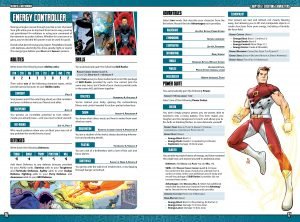 This is Solar Ray, or just Ray to his teammates. He appears—alongside his friends Anansi, Ultra, and Pinnacle—in the Basic Hero Handbook’s tutorial comics. The Energy Controller’s Ability ranks focus mostly on being tough and fast, with the cocksure attitude and powerful presence that usually accompanies the ability to throw fireballs. Their skills options give you some classic comic book staples for energy-wielders, letting you help personalize you hero as say, a lothario test-pilot or a watchful commander. Because Energy Controllers are more defined by their powers, they don’t receive as many Advantages as most heroes, but you still get some flexibility in deciding if your hero is a wisecracking brawler, a cool-as-a-cucumber tactician, or a terrifying force of nature. Finally, their Power Suite choices give you choice of what kind of comic book exploits you want to embody: The Avatar is your classic Human Torch, able to transform into a living incarnation of your element; the Blaster, on the other hand, is a classic one-trick pony who can only do one thing, but does it very, very well (and gets some extra Skills and Advantages, since they’re not out there hotshotting all the time); the Elementalist splits the difference as a master of energy, able to control and wield their element with extraordinary skill, but not transforming into it.

The Basic Archetypes are fast, easy, and flexible enough to make each hero feel personal, obfuscating the math and overwhelming choices while still giving players a standard 150 power point, Power Level 10 starting character they can bring to the table alongside veteran players who create their characters using the rules found in the Deluxe Hero’s Handbook!

The full basic Hero’s Handbook will be available in print later this summer at GenCon. Hope to see you all there!

Modern Monday: Modern AGE is Out! What’s It About?
Scroll to top