Today, we’re concluding a series that shows this off a little. The Fantasy AGE Bestiary is an excellent book full of great monsters, horrors, and adversaries for your Fantasy AGE heroes. But its utility isn’t limited to Fantasy AGE campaigns – we’re going to talk a little about how these monsters might fit into the romantic fantasy setting of Blue Rose.

This is the last of three articles taking these critters, one at a time, and discussing where they might fit into Blue Rose’s setting, and what (if any) mechanical adjustments need to be made to make room for them. See the first part here, and the second part here. 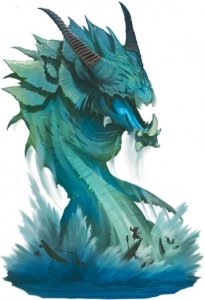 Ocean Worm: Though Aldinfolk have legends of dragons, they do not consider these titanic ocean-going terrors to be dragons, per se. Still, the sailor jargon referring to them as “worms” has stuck. Many sages also refer to them as leviathans, and to the Lar’tyans, they are the Great Enemy, one of the few things that threaten their mighty warships. None of these with breath weapons have ever been reported in Aldean history to date. (See also the Shadow-Touched Serpent, on p100 of the Six of Swords adventure anthology.)

Ooze: Though strange, ravenous creatures with gelatinous bodies have existed for a long time, it is only recently that Aldin scholars discovered a strange fact: all of them are the remains of sorcerous work. Though it’s likely the Sorcerer Kings deliberately created some of them, the truth is far stranger: most of them used to be other creatures, or other sorcerous creations entirely, and all collapsed and devolved into these protoplasmic horrors, held together literally with sorcerous malice and little else.

Penanggalan: Old, blasphemous rites are responsible for the creation of the penanggalan. Similar to those which create liches, these sorcerous rituals are remnants of the ancient sorcerous traditions in what is now Drunac. The witches of the Rezean people are some of the few who recognize the signs of penanggalan among today’s adepts.

Rat King: According to certain rhydan sages, the conjoined intelligence of these strange horrors is a blasphemous mimicry of rhydan intelligence, the closest that Shadow can manage to the gift of a living soul. Whatever causes it, they are dangers in places where rats are plentiful and have many places to hide, which includes most cities. Rhy-rats (see Aldis: City of the Blue Rose) are best aware of the dangers of the rise of rat kings, and consider the careful monitoring of non-rhydan rat populations as part of their wardenship against Shadow.

Reaper: The priesthood of Selene teach that the reapers first appeared with the sorcerous rite that created the first of the unliving (different legends identify this unliving differently, but most tellings suggest it was a vampire or lich). Whatever their genesis, reapers now come hunting among all of the people of Aldea, living or otherwise. Many who find themselves stalked by a reaper flee immediately to adepts of the Selenite priesthood, who specialize in discovering what it is that has gained the ire of a reaper, and help a victim put it to rights, though sometimes this means seeing a murderer pay for the deaths they’ve caused.

Sea Devil: Sea devils rise up from the dark and cold depths that the sea-folk avoid descending into, for Shadow dwells in the deep oceans as well. Some sea-folk legends claim that sea devils are Shadow-corrupted members of their people from ages past; others seem to suggest that they are predators on sea-folk who rose to power by dwelling in the pelagic abysses. Regardless of where they came from, sea devils are a threat to all ocean-going folk: they are capable raiders of both subaquatic and above-water targets, swarming out of the ocean to attack sea-folk coves, seaside villages, and ships alike.

Shadow Person: Neither darkfiend nor unliving, elemental or fey, the exact nature of the shadow person is largely unknown. They are rare enough that only studied scholars are likely to recognize the signs of their predation without extensive research. They are known to torment the people of Kern most regularly, likely because Kernish folk are denied the means of defending themselves against them by their dark masters. Shadow people are considered darkfiends in Jarzon, and the witches of Rezea are said to know specialized wards to keep them from creeping into tents among the tribes.

Shard Lord: Records in the Vault of Censure – that collection of works considered too dangerous to permit general dissemination by the Crown in Aldis – claim that shard lords are a true abomination: the results of an infusion of arcanely sensitive shas crystals with the emanations of Shadow. This is why they are sometimes referred to as “shas lords.” The fact that shard lords are found most often in the Shadow Barrens upholds this origin story, as all of the shas deposits of that dark land are known to be utterly corrupted by Shadow, suitable only for works that aid sorcery.

Soul Harvester: For as long as Aldean folk have recorded their knowledge of monsters, they have spoken of soul harvesters. But these monstrosities were relatively uncommon for most of that history, until the actions of one of the Sorcerer Kings, the tyrant Yngalandis. Experimenting with uses for souls, Yngalandis constructed a sorcerous device that acted as a beacon and lure for soul harvesters, drawing them into this realm and forcing them to his service. Unfortunately, machinations by a rival not only destroyed the device, but scattered its power across Aldea, acting as a lure without an attached trap. Though these emanations have long faded, whatever culture exists among the soul harvesters has established this dimension as a place attractive for hunting, and they continue to stalk its folk.

Thin Man: Some of those who served in the wretched halls and palaces of the Sorcerer Kings mentioned the thin men afterwards, describing them as strange entities that came through shadowgates at the behest of the Sorcerer Kings. Whether ambassadors from a strange people known only to the Sorcerer Kings, or otherworldly mercenaries paid in some terrible coin, no one knows. It is sufficient that these things yet stalk the peoples of Aldea. Some scholars suggest this means that the thin men have either developed their own means of passage into this world, or that there yet remains at least one shadowgate that they have access to.

Treeman: It is said by some that the deeps of Wyss are home to entire communities of the treefolk, living trees who shepherd trees the way mortal shepherd sheep and cattle. Whether this is true of Wyss or not, treefolk occasionally appear solitarily in other deep forests. They are usually hesitant to speak to any folk, although a few rhydan enclaves have managed to establish alliances with them, and actually consider them kin in some capacity, plants given minds and souls the same way they are animals who were given such. Treefolk mystics are all incredible masters of the Nature Reading and Plant Shaping arcana.

Troll: Though they were once the terrors that haunted the high mountain passes, trolls are almost exclusively found in the Golgan Badlands, the Veran Marsh, the Shadow Barrens, and the wastelands of Drunac.

Werebeasts: Almost unheard of in Aldea, the exact origins of werebeasts are by and large a mystery. Some rhydan enclaves warn their members that werebeasts are what happen when rhydan are lost to Shadow, while some scholars think it is a curse inflicted on those who have mastered shapeshifting arcana who become corrupted. However it happens, it does so rarely, so much so that most Aldeans have never heard of werebeasts, though their existence is recorded among the Rolls of the Damned in Jarzon, and in the lore of Selenite mystery cults.