One of the major themes in the Lazarus comic books is humanity: What does it mean to be human and when do you stop being human? At the lowest end, the Waste of the world are treated as livestock to be used or discarded as needed and at worst as pests to be exterminated. The concept of human rights is a relic of the past, unknown to much of the world’s population, and so many Waste exist at the fringes of both civilization and humanity: They fight and hunt and scavenge to survive, even turning on one another. Are you still human when all the world—and maybe even you—regards you as an animal? 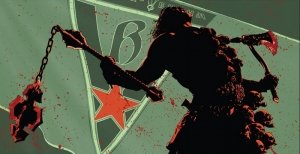 Of course, the comics address the other end of this chilling question: When are you so advanced you essentially graduate beyond humanity? Joacquim Morray is more steel than flesh. Li Jiaolong’s mind exists in the digital realm and operates a heartbeat away from singularity. Forever Carlyle cannot die. Are any of the world’s Lazari still human when their lives are so far removed from all the essential constraints that define mortal lives?

The World of Lazarus would be remiss if it didn’t allow players to tackle these same questions (and kick butt doing it), and so the book introduces the concept of Augmentation talents to the Modern AGE system. Augmentation talents are special categories of talents locked behind story-based walls and only permissible with Gamemaster permission, and grant characters an extra boost above and beyond what ordinary talents provide. Most player characters will have access to the four Minor Augmentation talents—Acuity, Adrenal, Resilience, and Strength—which represent minor upgrades to the human condition powerful entities can grant their favored agents. Minor Augmentation: Adrenal, for example, boosts a character’s speed and response times, allowing them to react faster in combat, evade enemy strikes, and push their accuracy beyond human potential by overstressing their body. While Minor Augmentation talents can provide a competitive edge, they pale next to Lazarus Talents—Armor, Awareness, Cognition, Endurance, Muscle, Prowess, Reflexes, and regeneration—which reflect the pinnacle of science wielded by the Families. While every Family doles out minor augmentations as rewards to loyal Serfs and useful agents, Lazarus talents are reserved and secretive, developed and possessed solely—in theory, at least—for a Family’s Lazarus and no one else. Lazarus talents can provide suites of unusual or unique abilities, such as Cognition’s ability to predict the future or Prowess’s ability to move at top speed without making a sound.

Because the Families in the world of X+65 command a variety of sciences and construct their Lazari in different ways, Augmentation talents focus on the results rather than defining how characters get there. A Carlyle agent and a Morray agent can both receive Minor Augmentation: Strength as a reward for their service, but the Morray talent represents implanting artificial muscle fiber or replacing whole limbs with cybernetic prostheses while the Carlyle reward reflects genetic engineering. While mechanically identical, the different applications of the talent will represent different changes in the characters’ lives: an inhuman appearance for the Morray cyborg and a lifetime dependency on maintenance drugs and hormone therapy for the Carlyle mutant.

The World of Lazarus campaign setting even provides additional rules for creating a Lazarus of your very own (either as a player character, or as an NPC for your own campaign), as well as several options for including Lazari in your campaigns and full statblocks for four Lazari appearing in the comics: Forever Carlyle, Sonja Bittner, Joacquim Morray, and Li Jiaolong. But to show how easy it is to make a Lazarus of your own, I’ll run through the process here to create a Lazarus we didn’t include: The Zmey, the barely-controlled engine of destruction that serves as the Vassalovka Family’s Lazarus! We very deliberately omitted this ultimate physical antagonist’s statistics from the book itself so each Gamemaster could custom-build their own version to always be a potent threat regardless of their group’s experience and makeup, but for this blog we’ll benchmark the Zmey to be the equivalent of a 12th-level character—slightly higher than Forever Carlyle’s listed benchmark.

Here’s what you need to know to build a Lazarus for your own World of Lazarus Game:

This gives us an impressive statblock, but remember this is the equivalent of a starting Lazarus and we want the equivalent of a 12th level Lazarus! So we have an additional 11 Ability advancements, 11 new Ability Focuses, and 11 Talent improvements! You don’t have to create your NPCs as if they were player characters—and in fact you’ll get much more focused, less cluttered character sheets if you just select Ability ranks, Focuses, and Talents that feel appropriate—but I like this method personally and so we’ll stick with it for now.

After adjusting for additional levels, here’s the version of the Zmey that will haunt my players’ nightmares: