(This round table contains mild spoilers for Fenris in Dragon Age 2. Yeah, it’s been 8 years but I still meet folks who just started playing it, Inquisition, and even Origins so erring on the side of spoiler alerts) 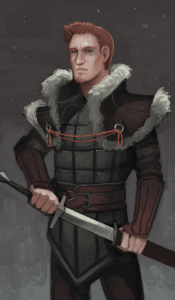 Hey folks, this is Jack here to talk a bit about Faces of Thedas.

Now no big book of characters can include every character in a large universe. You can look at our various offerings in DC Adventures, Wild Cards, A Song of Ice and Fire, and now Dragon Age to see this. The books include a lot of characters and groups, but not everything makes it into a particular book.

So who makes the cut? Well, it depends.

In Faces it was an intentional mix. The prime focus was on “quest givers”, people who enabled adventures and roleplaying opportunities for players, not who necessarily had their own adventurers. This is where characters like the Divine, Josephine Montilyet, and others came in.  But not all the characters fit exactly into that category. In many cases, characters were selected with a fair amount of wiggle room in how they could be used, often because they had targeted, and important but limited involvement in the canonical tales of Thedas.

In addition, some characters were included because they’d make good antagonists.  Potential antagonist characters weren’t necessarily villains, but definitely characters who could easily end up on the other side of a conflict from player heroes. This is your Lambert or Knight-Commander Meredith. Depending on the timeline and group? This might even be your Iron Bulls and Alistairs. This is also why we briefly revisited some of the important Darkspawn “bosses.”

Other characters were included because they would make potential romantic interests, allies, and patrons. These included some companions from the games, like Leliana. This also included characters with ties to important groups or events that still had that aforementioned wiggle room that makes them easier to throw into a campaign or adventure. 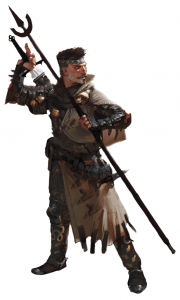 Some characters were also included because not including them was never an option. Be it Bioware or one of the several Dragon Age fans on our staff, there were characters people inside the production of this book wanted to see. This is also your Alistair, but also your Dorians and Cullens and so on.

With a few characters—very few admittedly—it was even the case someone in on the production side didn’t want to use a character in the book. Sometimes that person was me, but not always. I’m not going to detail who those characters were, but it was never a matter of “ugh, I don’t like them!” but some other reason that seemed compelling enough to use a different character.

So what about some of the folks who didn’t make it? It’s not that they couldn’t fit into one of these roles. Its not that they weren’t cool or no one liked them. It was just they didn’t make it for various reasons. For example, I actually like Fenris a fair amount. However, Fenris’ tale is pretty self-contained, socially isolated, and during Dragon Age 2 its quite possible he ends up dead at Hawke’s hands. So instead we had characters like Iron Bull or Michel—skilled passionate warriors with a story whose net cast a bit wider plot and campaign wise.

Note a lot of this was clearly “in our opinion.” That’s the thing about design, there’s always an element of personal, even arbitrary decision making. I’m not trying to thumb my nose and say, “well when you’re developer you can fix it!” but…there is a much less confrontational and more good-natured truth to that.  Not everyone will agree about what to include in a product.

And in case anyone is really wondering? I like Yvette. Yes, she’s a minor character who arguably “doesn’t matter”. I also think she makes a good romantic foil and political connection for campaigns who could grow and develop in response to interactions with a player group. So now you know.