It’s been as tricky a time for Modern AGE as it has for other games during the pandemic, but we’ve still been busy. I’m writing to tell you where we’re at with the line, what’s just come out, and what’s coming.

First of all, COVID-19 put a bit of a dampener on our first hardcover release of the year, Enemies & Allies, so I’d like to give it another mention! Enemies & Allies is a “core” release for Modern AGE, detailing a few dozen possible friends and foes for your campaign. Enemies & Allies provides entities and optional rules split into modern fantasy, horror, crime-focused genres, military and technothriller, and science fiction focused chapters. The book includes appendices for creating your own NPCs, introducing ordinary animals, and converting creatures to and from other Adventure Game Engine books.

Modern AGE has two adventure series. The first, Modern AGE Missions, is a series of PDF releases mostly unconnected to any particular setting. The first, Warflower, is available through our webstore or DriveThruRPG. The next adventure, Feral Hogs, is due out later this quarter.

The second series, Five and Infinity, is a series of semi-connected adventures in the Threefold setting that can take characters from level 1 to 16. Five and Infinity was originally going to be released as a hardcover, and it still will be, but has been pushed back. For now, we’re releasing the adventures chapter by chapter, along with Chapter 0: The Adventure Generator, a table-based tool for producing plots for Threefold games that’ll set you back just 99 cents. Like Modern AGE Missions, they’re available at our webstore or DriveThruRPG. 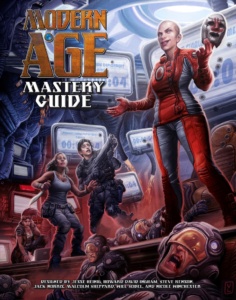 Modern AGE Powers is what you think it is: a guide to using extraordinary powers in Modern AGE. This book collects rules for powers found in prior releases, adds new rules, and does a deep dive into the story elements of magic, psychic disciplines, extraordinary abilities and items, and even a roster of strange beings suitable for games that revolve around the existence of powers. Modern AGE Powers is currently awaiting second drafts and is due to release in 2021.

Not counting Five and Infinity’s eventual hardcover release, Modern AGE currently has two more books in various stages of development, and casual discussion about everything from licenses (World of Lazarus has done well, and we’re interested in similar good fits) to rules innovations. Stick around, play the game, and tell me what you’re doing with it, and what you’d like to see, though our various social media channels.