Although they come in the final chapter, the deck plans are very much the centerpiece in Ships of the Expanse. It is also, in part, the reason this book took so long to get out. Although the pandemic can take most of the blame there, making all these plans involved an incredible amount of time. We know it took a while, but a lot of blood, sweat, and tears went into this project. We apologize for the delay, but I think you’re really going to enjoy this book!

There are 28 ships detailed in this book, and we took a lot of time and care to get every one right. We wanted to make them useful for gameplay and make sure that they were as realistic as possible. You might be surprised how long it takes to figure out exactly what goes on each deck: how many crash couches are needed for the crew, how many bunks, where does the galley go, does this ship have a med bay, how many cargo holds, how can you access the cargo holds, and so on. Needless to say, it gets complicated.

Today, you get to see a preview of one of the deck plans, the UNN Monroe-class Light Destroyer, and I’ll break down what all you’ll find in the ships section of Ships of the Expanse. They are in the order of UNN, MCRN, Independents, and finally, a few unique ships such as the Anne Bonny from Abzu’s Bounty. Then they are then listed in alphabetical order. We debated organizing them by size class, but in the end, alphabetical seemed best for easy reference.

Each ship opens with the ship’s specifications, which is very similar to how they are presented in the Expanse core rulebook, but these are a little 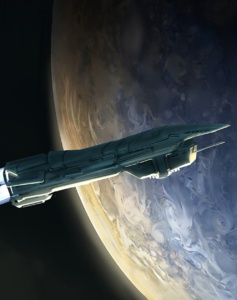 more detailed. They also feature the new qualities and flaws that are included earlier in this book. Following that are a few paragraphs that talk about the ship’s origins and history as well as its purpose within the military fleet or as a civilian vessel, followed by a story hook that presents how the ship might appear in an adventure. I think the story hooks will be especially useful for inspiration (and to give you an excuse to use your new deck plans) since it isn’t always easy to figure out how a group of PCs might end up interacting with some of these beasts.

Following the text, you get two silhouettes from different perspectives. One of these shows the actual decks as well as elevator or ladder shafts.  And then you get to the good stuff―the deck plans! For each individual ship you get deck plans for each type of deck. However, if there are four decks of crew quarters, we only provide one plan for that since they are going to be identical in most cases. There is also a key that indicates which decks are on which level.

So, let’s talk deck plans. One of the choices I can see being controversial is the decision to include cargo and the like on the schematics. We felt that it added visual interest and also gave a better idea of space and scale. If you’re using the deck plans on a VTT or the like, you can just ignore the cargo if you want your cargo bay to be empty. I know everyone is going to have their own opinions on certain details. In the end, we had to make our own choices, often with very little actual information to go on. Though, I think you’ll agree that these things look fantastic and will be a wonderful addition to any Expanse game, not to mention just being a lot of fun to pour over.

Redoubt in the Mists
Scroll to top Skip to content