The setting described in The Expanse RPG is just after the events of the first novel, Leviathan Wakes, but that doesn’t mean you have to set your game at that point. You could go back to the beginning of Leviathan Wakes and tell a story that runs parallel to the adventures of the crew of the Rocinante, or even have your player’s characters take their place. Alternately, if you prefer, you could run a game set in the period of the later novels, or a time much earlier when humanity is first leaving Earth. The core Expanse RPG book doesn’t provide source material for either of these possibilities (though you can expect to see later history covered in future Expanse RPG books) but that shouldn’t prevent you from doing what you want. 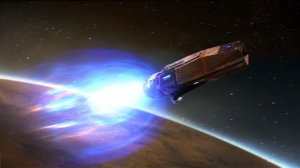 The early history of The Expanse is ripe with campaign and adventure possibilities. The novellas Drive and Butcher of Anderson Station offer insights into history before Leviathan Wakes.

The early expansion and colonization of the Belt offers a lot of potential stories and adventures. Rival companies vie for influence and control. Newly established colonies in the outer planets smuggle in the goods and supplies needed to survive. The early days of the expansion from Earth and Mars are much like the Wild West as humanity spreads out into the solar system in search a new and better life – anything to escape the overpopulated cities of Earth.

The novella The Churn describes the crime-ridden, overpopulated city of Baltimore. Crime bosses and their “families” smuggle weapons and illegal cybernetic implants while engaging in all-out war with the authorities. Players could be part of one of the underground smuggling operations or the desperate authorities trying to stem the tide of crime.

Corporations vie for power and influence as humanity reaches out to colonize asteroids, moons, and planetoids throughout the solar system. Early pirates prey on ships that travel the vast, empty spaces between worlds. Most of the early pirates are essentially privateers in the employ of corporations, using the greedy and morally compromised to do their dirty work for them.

The Outer Planets Alliance (OPA) springs from the wants and needs of the citizens of the planets beyond Earth and Mars. The Belters find themselves perilously close to slavery since they are dependent on resources controlled by Earth. The characters could be early members of the OPA struggling to keep the people of the Belt free and dreaming of a day when they control their own destinies. The Butcher of Anderson Station is a perfect example of the conflict between the OPA and the inner planets.

Future supplements for The Expanse will explore the events of Caliban’s War and beyond, but don’t let that limit where and when you set your stories. The struggle for power continues as humanity travels out into the stars. For the time being, stories in this time are up to the GM. You could use the novels as inspiration, telling stories that run parallel to those in the books, or the characters could take the place of the protagonists in those novels, but with the opportunity to take the story in their own direction. You could also choose to go in a completely different course with the story. The Expanse RPG does look at some of these possibilities, including a number of “beyond canon” series concepts where the protomolecule does something quite different, or ends up somewhere else altogether.

The Expanse: Doors and Corners
Scroll to top