I can’t properly express how excited I am to see Return to Freeport in its final, compiled form. This is a project that has been with me for a long time, and I couldn’t be more delighted with the final results. The idea of developing six adventures (by six amazing authors–Crystal Frasier, Jason Keeley, Jody Macgregor, Patrick O’Duffy, Stephen Radney-MacFarland, and David Ross) that each stand alone but also form a single united narrative, seemed daunting when I came on-board in 2013 to help with “Freeport: The City of Adventure for the Pathfinder RPG,” but I never would have guessed the final book would take until 2019 to see print. 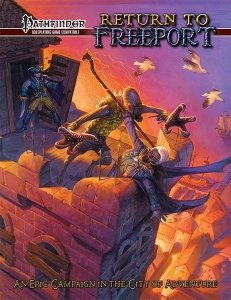 Six years, for six adventures. And let me say up front—that’s almost entirely my fault. It is certainly not the fault of the authors, artists, or anyone else at Green Ronin. Mea culpa, and sorry folks.

And while I might be biased, I think the end result here is worth the wait!

The 168 pages, full color, hardback compiles and updates the six adventures we originally released in PDF format into one glorious book. The adventures take characters from 1st to 12th level, and go from hunting down the source of a curse in the streets of the city, to facing ancient terrors and enemy fleets on the high seas, to rooting out traitors and madmen in an even-darker version of the City of Adventure.

As much as possible, this book is a Love Letter to Freeport. I hope we managed to capture the unique blend of fantasy, horror, and swashbuckling action that has been the hallmark of Freeport since it launched almost 20 years ago. The authors have done a tremendous job both highlighting many of the elements introduced in the 544-page “Freeport: The City of Adventure” sourcebook, and in creating new foe and allies to surprise the players. I don’t want to get into spoilers, but there are unhuman gangs, undead crews, love, hate, revenge, and political machinations from other planes of reality… all with a side of grim smiles and sharp cutlasses.

One of the joys of working on a project like this is getting to expand a setting you love with characters, maps, and art to help bring it to life. Cover artist E.M. Gist knocks it out of the park illustrating one of the more dramatic moments of the adventure, and through the book the illustrators have done awesome work bringing the gritty streets of the city to life, and creating the look for new and unique ships, monsters, and locations into glorious detail. Even if I didn’t love the adventures themselves (and I do), I’d delight in the visuals that help expand one of the most veteran d20 locations.

I had a lot of fun visiting Freeport as a player when the first adventures for it came out, and I am thrilled to have been allowed to return as at our guide now, nearly two decades later. This book is a literal Return to Freeport for me, but it’s also a great opportunity to come visit the City of Adventure for the first time.

Just keep your eyes open, and your weapon handy.

Owen K.C. Stephens is a game designer who has worked on a number of products for Pathfinder, the Star Wars Roleplaying Game, and more. He is our Fantasy AGE Line Developer when he’s not working one of his other jobs, running his own company (Rogue Genius Games), or writing things for his patrons at https://www.patreon.com/OwenKCStephens.