Enemies & Allies sits between them. It’s the big book of Non-Player Characters and unusual creatures that can act as threats or allies. Its five chapters not only present various beings organized by genre but add optional rules to enhance their presence in your campaign, from the disturbing psychic impressions generated by horrific entities to the places of power that tend to attract fantastical creatures. Think of it as a significant expansion of the Modern AGE Basic Rulebook’s Chapter 9 adversaries, and more: rules to generate NPCs quickly, quick listings for a number of animals, and even guidelines for adapting creatures from other AGE system games.

However, one nasty antagonist is missing: the creature on the cover! When I wrote the cover description, I felt it was important to put the multi-genre nature of the book first, and the Cyberdemon represented that well, but I wanted individual authors to come up with their own ideas first instead of just reproducing my concepts. Still, for the completists out there, here are its game statistics. Note that the individual entries in Enemies & Allies itself are more detailed than what follows. 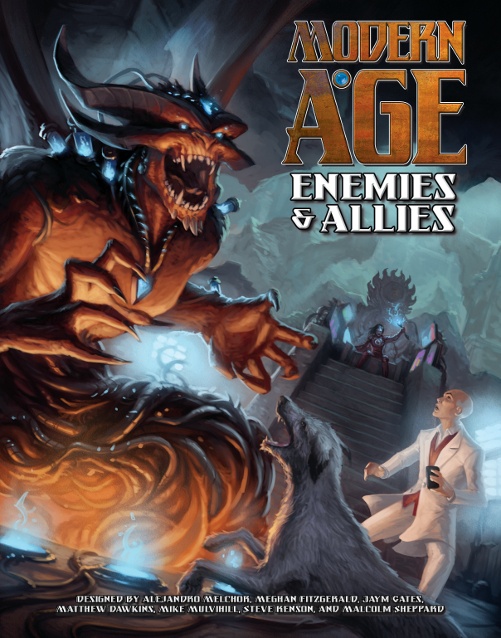 In certain secret labs, scientists and occultists join forces to create unusually potent computers and cybernetic enhancements. These synthetic limbs, brain implants, and crystal-processor super-servers are powerful because they don’t rely on Earthly energy. Instead, these ritually manufactured objects draw energy from the so-called Netherworlds, where Inimicals—beings the uneducated call “demons”—dwell. These implants are installed in secret operatives who are sent on the most dangerous missions, and scientists working on disturbing theories about the origins and ends of all things. These individuals don’t know that if they die, their souls are claimed through the devices they used. When enough of these sacrifices provide their souls as sustenance, the Cyberdemon is born, ready to be summoned by a knowledgeable occult technologist.

Cyberdemons are potent servants, whose formidable strength is enhanced by their abilities to influence technology. A Cyberdemon’s appearance is based on the technologies which were used to create it, combined with a form selected from the combined fears of those implants’ former owners.

Note: Health, Defense, and Toughness are listed by Mode, in Gritty/Pulpy/Cinematic order.

*+2 to damage in Pulpy and Cinematic Modes

Demonic Data (4 SP): By spending 4 SP in combat or while interacting with an electronic device, the Cyberdemon can transmit a burst of corrupt data to compromise or destroy anything capable of electronically processing data. Roll the demon’s Intelligence (Computers) against TN 15. On a success, the Cyberdemon either disables a number of devices in a 30-foot radius equal to the Stunt Die result or steals data from a single device in a 30-foot range. This data can be retransmitted using the interface special quality.

Inimical Cable: As a minor action, the Cyberdemon can shoot a spike-tipped segmented metal cable from its body at high speeds up to 30 feet from its body. The cable inflicts ballistic wound damage. After hitting its target once with the cable, the Cyberdemon can use it to engage in close combat as a minor or major action even when the demon itself is out of hand to hand range, for as long as the cable stays attached to it. This allows it to use grappling stunts, melee stunts, and other stunts and actions normally limited to close combat. To sever the cable, a combatant must inflict 20 points of Health damage. This damage is suffered by the Cyberdemon. The inimical cable has the same Armor and Toughness as the creature. The Cyberdemon can produce any number of Inimical cables, but its ability to control them are limited by its actions per round. Some Cyberdemons use clouds of destructive nanorobots, segmented armatures, and other visually distinct variations of the inimical cable, but most function the same.

Interface: The Cyberdemon can transmit data to an appropriate storage or computing device or connect to any network within 30 feet by spending a major action. The Cyberdemon can also act as a computer, wirelessly activating output devices whether or not these have wireless capabilities. The Cyberdemon’s processing powers are on par with the highest-end consumer-grade systems, and its storage capacity is prodigious, increasing as the technologies that spawn it become more sophisticated. Currently, a typical Cyberdemon can store a petabyte (1000 terabytes) of data.

Spectral Sight: Cyberdemons can see infrared, ultraviolet, and radio waves, along with electrical activity. A Cyberdemon cannot be blinded by environmental conditions—its eyes must be destroyed. Furthermore, it can see up to 10 feet through walls, but must succeed at a TN 15 Perception (Seeing) test to perceive anything more than the rough outlines of people and objects.

Talents: Hacking (Master), Overwhelm (Master). At the Game Master’s discretion, the Cyberdemon may also have technological augmentations using the rules in Enemies & Allies (Chapter 5: Science’s Edge), the Modern AGE Companion (Chapter 5: Extraordinary Abilities) or other books (such as Threefold or Lazarus) presenting such enhancements.

20 Years of Green Ronin, Over 2 Years of Modern AGE

Since this is 2020’s first Modern AGE-related post, I would be remiss if I didn’t note this was Green Ronin Publishing’s 20th Anniversary. I was fortunate enough to work on a new edition of Ork! The Roleplaying Game, Green Ronin’s very first RPG, and now, with Modern AGE, it’s been my privilege to oversee the birth and growth of one of its newest lines. As I said, 2020 should bring forth the remainder what I consider Modern AGE’s core rulebooks, but this year will be busy with even more material for the game: adventures, Threefold setting material, and one really exciting project we can’t wait to announce. Cheers!