Brave heroes stand up to stop super-powered opponents whose abilities place them beyond the reach of most law enforcement. But what’s the villains plot? How do they lay the groundwork? And how do they react once a band of meddling kids starts sniffing around their scheme? It’s not a secret that Mutants & Masterminds is a fun system but lacks much adventure support. Groups are still playing our introduction to 3e, Emerald City Knights a decade after its release because we’ve been falling down on providing more adventures for you.

One of the reasons Green Ronin asked me aboard to develop Mutants & Masterminds is for my experience developing fun adventures. And while a lot of my attention has gone into delivering on all the outstanding projects and sewing my costume for the last few years, we’ve all been tinkering away in the background to solve the greatest of M&M challenges: adventure! 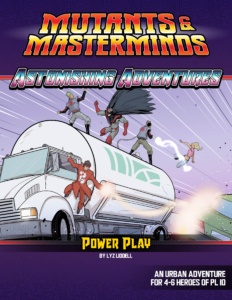 Astonishing Adventures is a new monthly PDF series of superhero adventures, written by some of the best minds in the RPG industry today, like Steve Kenson, John Polojac, Lyz Liddell, Amber Scott, and many more. Each adventure includes everything you need to play, including some suggestions for how to bring your superheroes into the excitement, how it might tie in to Earth-Prime, suggestions for expanding the adventure if you want more than just one or two nights’ entertainment, and all the statblocks you need, generally clocking in around 15-20 pages of excitement.

We’ve also played around with the statblock presentation so GMs can find the information they need at a glance, with a compact summary whenever a combatant is mentioned in the running text and more details in each adventure’s Cast section. As both a graphic design and a GM, I’m pretty happy with that development. 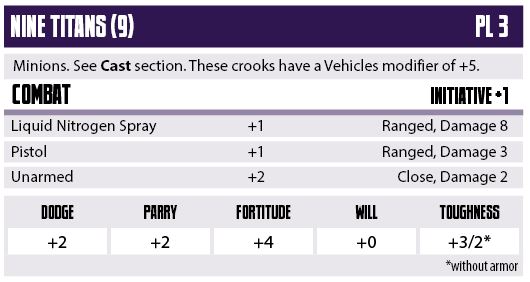 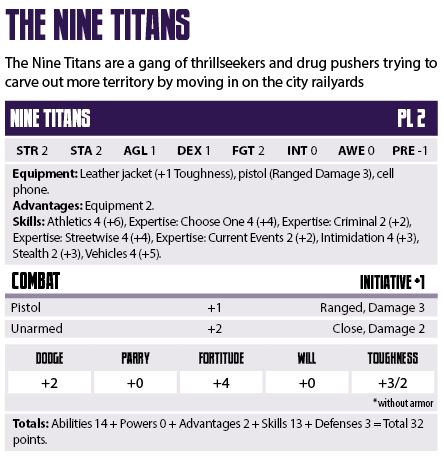 While most of the Astonishing Adventures will be designed with standard PL 10 “cape and cowl” heroes in mind, we’ll also be releasing support for cosmic teams, hero high adventures, and more as time goes on.

Our first round of releases drop next week. You’ll be seeing the urban adventure Power Play and the assault on a volcano fortress that is The Island of Dr. Sersei, the two new adventures included in the Deluxe Gamemaster’s Guide, letting you run the adventures even if you still keep your original Gamemaster’s Guide! February will see Rise of the Tyrant as well as the lighthearted Reign of Cats and Dogs, and every month after will see the release of one or two new adventures. We’ve got text and art orders ready to carry us for the next 12 months, so let’s make 2020, and our own 20th Anniversary, the year of adventure!

Are you going to be releasing Astonishing Adventures in print?

Mutants & Masterminds 3rd edition has produced several books from regular PDF series in the past, but we’re not currently planning to release any of these adventures in print. If there’s a lot of fan demand that might change, but for the time being, they’re PDF exclusive.

Will there be two adventures every month?

We plan to alternate. Some months will release a single adventure and other months will have two.

Will you make an Astonishing Adventure around my favorite M&M villain?

I don’t know. Hopefully. There are a lot of great Mutants & Masterminds villains, so I don’t know that we’ll get to all of them, but we’ll try to provide a good mix of classic fan favorite and new or niche weirdoes. Conundrum, Cerebrus Rex, and Medea are all coming soon, and even more villains are showcased in our Mutants & Masterminds fiction from Nisaba Press.

How much will each Astonishing Adventure cost?

Each Astonishing Adventure is $4.99 USD, less than the price of a foot-long sub!

Are you planning to do more multi-part adventures like Emerald City Knights?

The NetherWar is brewing. Stayed tuned for more information.