Last time I got so interested in Enemies & Allies’ cover I neglected to really get into the book’s contents. Let me correct that now.

In short, Enemies & Allies is a book of Non-Player Characters and creatures for Modern AGE, but it’s a bit more than a manual of, er, “monsters.” The book contains five chapters and three appendices of NPCs, strange creatures, and guidelines for using them. Each chapter covers a selection of people and creatures that suit a particular genre. Some of these beings are unique, while others describe a type. Game statistics cover Gritty, Pulpy, and Cinematic modes for each entry. 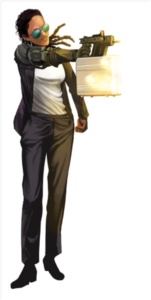 The Extractor’s coming for you.

Will Sobel’s chapter starts by discussing the role of magic and monsters in modern games before providing rules for the arcane places of power that tend to attract them. Will did a fantastic job of drawing from American folklore as well as classic fantasy, and produced the following entries:

Author Dylan Birtolo’s chapter presents a selection of people (and one robot) suited to military and espionage-focused games. After providing guidelines for modeling the abilities of the apex operators in this shadow world, he presents the following entries:

Matthew Dawkins knows horror, so he was a natural choice to pen this chapter about creatures drawn from the genre. This chapter is a bit different from counterparts in other games as we tried to go outside the classic standards in a few cases, and we linked them to psychic phenomena to differentiate them from fantasy creatures (with options for changing this described clearly in the book). This chapter starts with an overview of the genre, and new rules for sensing psychic impressions—and optional rules for evil deeds making characters more vulnerable to evil creatures. Its entries are:

Chapter 4: The Law and the Lawless

Ron Rummell created this selection of NPCs who have criminal and law enforcement backgrounds. These are suitable for most modern games, but this chapter opens with advice on how to focus on cops and crooks, introducing guidelines for undercover NPCs and rules for Heat, which measures how strongly interested parties might be looking for indiscreet characters. Then we move on to the following entries:

Three appendices round out the book:

Appendix I: Quick NPCs introduces a new system to create Non-Player characters based on their intended roles, abilities and threat ratings. This includes a selection of new Special Qualities and new options for administering stunts.

Appendix II: Animal Threats profiles a number of ordinary animals and includes advice for running them in the game.

Appendix III: Adapting Creatures from Fantasy AGE & Blue Rose gives you what it says: Rules for using the creatures from those AGE games with Modern AGE and vice versa.

Appendix I and II were written by Alejandro Melchor and were his final work for the Modern AGE line before his passing. We continue to miss him.

Your Adversary and NPC Toolbox

In essence, Enemies & Allies is a set of tools. We design them for you and show you how to use them, but we trust you to apply your own creativity. That’s the Modern AGE ethos—and I hope they prove useful.