They say that necessity is the mother of invention, and that is certainly as true in the tabletop gaming business as it is anywhere else. One of the necessary reasons for writing adventures for the various game-lines that I work on is the need to have something to run when I am a guest at various conventions. For example, I originally wrote the Expanse adventure Salvage Op as a demo adventure to run at conventions before the game was even released. I likewise wrote the Blue Rose adventure Flight of the Snow Pearl (on-sale now!) in order to have something to run at a convention. I honestly don’t recall if it was originally OrcaCon, GaymerX, or one of the big summer conventions where I ran it first, but I’ve used it as a demo adventure at a number of conventions over the past couple of years since I wrote it. 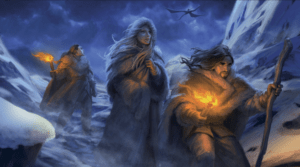 Without giving away too much about the actual plot of the adventure, Flight of the Snow Pearl is about what poet T.S. Eliot called “a wilderness of mirrors” which has become common parlance for talking about spying and espionage. In a situation or subculture where trust is a dangerous luxury, how do people maintain trust as an essential value? It’s a fairly short, focused, adventure but deals with some essential themes from Blue Rose, including characters helping those in need.

Flight of the Snow Pearl also demonstrated to me the way a fairly simple plot can play out in so many different ways at the table. I’ve lost count of the number of times that I have run the scenario at conventions, and it plays-out differently almost every time, with players focusing on different aspects of the plot and characters, and with certain rolls of the dice sending things off in different directions, even in cases where I’ve provided the same pre-generated characters to play. I love how such variability and variety are a part of tabletop RPGs.

So, if you’re looking for an adventure for your ongoing Blue Rose game, or have always thought of giving running the game a try—especially if you might want to run Blue Rose for a virtual convention or online event this summer—check out Flight of the Snow Pearl and give its story a go.