Last time I was here, I introduced Modern AGE, the contemporary era implementation of Green Ronin’s Adventure Game Engine. Look on this very page, and you’ll see the cover. I’m not going to call it the absolute, final article–fine tuning the look is Hal’s business–but this is darn close. I’m going to riff on the cover to tell you a bit more about what to expect. 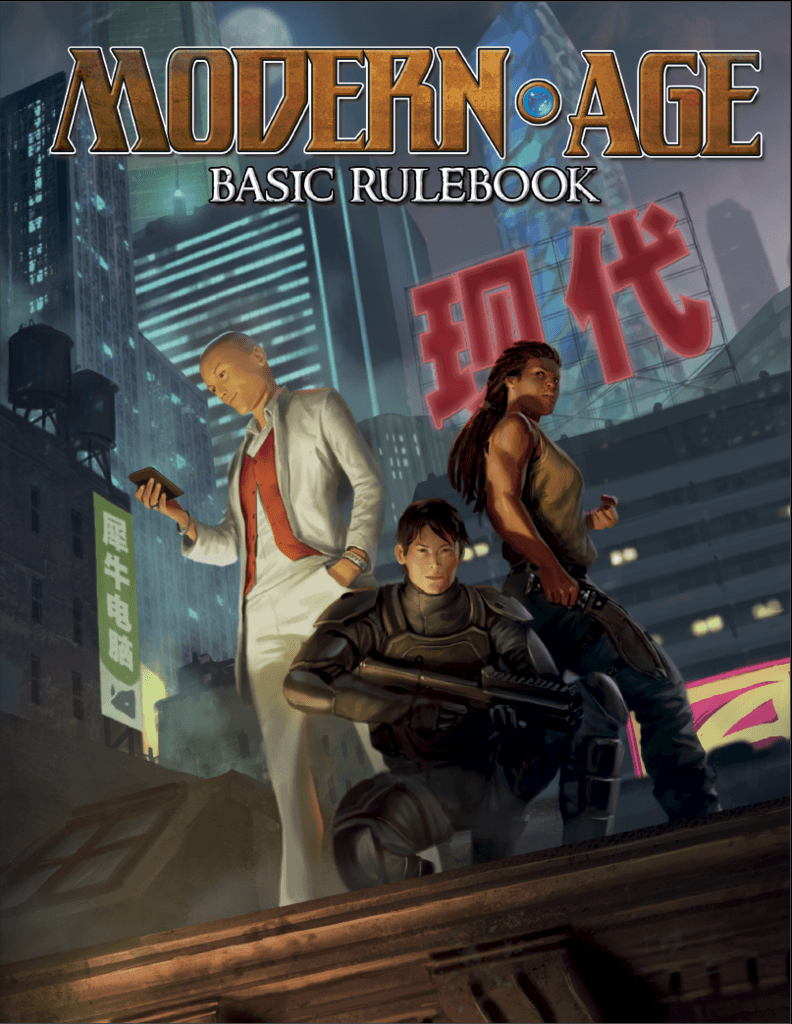 Who’s on That Rooftop?

Like many games, Modern AGE features iconic characters we use for examples of play, who indicate the kinds of characters you can build and advance. Early in outlining, I designed each iconic with input from a writer, making it their character–you’ll see the writers’ names pop up as example players (Meghan Fitzgerald is our “iconic GM” in these examples). Let’s look at who the characters are, and what they tell you about the game.

They Know What to Say

On the far left, Sean checks their phone. “Played” by Howard Ingham, Sean’s a socially focused character, and even though we don’t have set character sheets for iconics like them, they’re bound to have a high Communication score, along with focuses supporting social interaction. Modern AGE includes social influence and connection rules in its core. First off, we present a selection of attitudes an encountered NPC might have, and rules for gradually shifting an attitude in a direction conducive to a character’s desires. But this is an AGE game, so we’ve also baked in an option to get things done with one roll. If you’re like me, there are times you want to play through developing a relationship, and times where you want to know whether an NPC will help or hinder a hero right away. The rules let you do both.

Sean might also draw on a Relationship with an NPC, or Membership in an organization–we have rules for both, evolved from predecessors in Blue Rose. Sean might have the Intrigue talent to draw information out of connections, and a specialization like Executive or Socialite that makes it easy to draw on social ties.

Crouched in the middle, Brian McLaughlin is an ex-military operative, “played” by yours truly. Brian probably has a character Background or Profession rooted in military affairs, and a Drive that motivates him to stay armed, and ready for action. Modern AGE Drives provide a capstone benefit at character creation, bundled into a reason to say “yes” to engaging with a campaign’s stories. Brian’s focus is on ranged combat, so guns, bullets, and how to deal with them are obviously important to him. That means Brian picked armor with a high rating against ballistic damage. In Modern AGE, we split damage into impact damage, inflicted by melee weapons, ballistic damage, delivered by firearms, and armor-piercing penetrating damage. Ancient armor doesn’t protect against ballistic attacks; modern armor does. Almost nothing resists penetrating damage.

Brian may have the Rifle Style focus, and perhaps a specialization in Sniper or Gunfighter, which can make him a formidable opponent even when his targets have armored up. But much depends on the game’s mode, our term for what rules might be in play to support a genre. All characters have a resistance to damage called Toughness, but in the gritty game mode, it only protects against mild blunt force trauma. In pulpy and cinematic modes, however, one of Brian’s targets might shrug a shot off, and keep in coming.

Over to Brian’s right is Amy Wilson, “played” by Matthew Dawkins. She’s trained and motivated to deal with anyone getting too close for comfort. Amy’s a martial artist and melee weapons expert. Matthew wrote the equipment section, and knows the sort of blades, bludgeons and other weapons she might acquire. AGE games aren’t equipment focused, so each weapon represents a general category. Furthermore, note that with no classes, we’ve dropped the penalty for not being trained with a weapon, but since Amy is probably trained in multiple armed and unarmed fighting style talents and the Martial Artist specialization, don’t expect to be on an even footing.

One of the organizational changes we’ve made in Modern AGE will affect how Matthew plays Amy. In other AGE games, we presented one big list of combat stunts; in Modern AGE we have more stunts, but they’re split into smaller lists of stunts linked to specific actions (with some that fit any action, and advice that there is wiggle room). Some stunts are listed as “core,” meaning that as low-cost options that are easy to describe, they can be your first choice, to avoid decision paralysis at the table. We hope that this combined with short, focused stunt lists makes picking stunts easier. We’ve done the same for non-combat stunts as well.

So that’s who’s on the cover. What are they doing on that rooftop? What city are they in? (And who are the iconics I haven’t introduced yet, including the one who leads into chatting about the investigation rules?) Modern AGE doesn’t have a default setting, so it’s up to you, though the World of Lazarus, coming out at the same time as a supplement, provides immediate possibilities. If you want to know more, your best bet is to come visit our booth at Gencon–we’re Exhibitor #1321–or visit the “What’s New With Green Ronin Publishing!” panel at noon on Saturday.