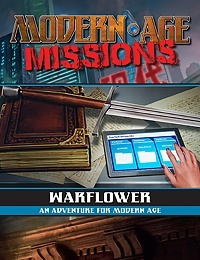 The Warflower inspires medieval sword masters and drug dealing alchemists alike, to discover its secrets—and kill for them. When this obscure 15th Century book gets stolen, strange, violent factions battle over its destiny, influenced by hidden forces who want the book’s secrets for themselves. Your team must uncover the secret contained in the Warflower’s pages—and your Game Master decides what that mystery is.

Warflower is an adventure for Modern AGE characters levels 1 to 4, with rules to play in any Mode and multiple options for its central mystery, so Game Masters can adapt it to supernatural, high-tech, or down to earth campaigns.

Originally the official Green Ronin Freebooter adventure introducing Modern AGE at Gencon 2018, Warflower has been revised and laid out with art as a PDF everyone can enjoy. Set in our early 21st Century, the adventure is otherwise suitable for multiple campaign settings, from your own to Green Ronin’s Threefold.