Let’s imagine that somehow, the cultural zeitgeist has moved to the unlikely place of trickster deities jumping through alternate universes. How did this happen? Could it be that an exceptionally large media franchise owned by one of the largest entertainment companies in the world produced a show with this concept? But more importantly, do you want to play such a character in a coherent RPG setting, tailored for the needs of games? Modern AGE and the multi-planar Threefold setting have got you covered. 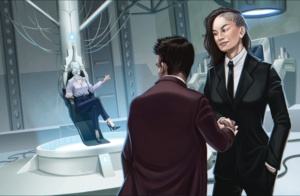 The Threefold Metacosm has many beings who might be called gods, but the ones most amenable to play are the Optimates: children of a prior generation of semi-retired deities. Some of them rule the Divine Empire, but others are free agents or exiles. To make our trickster, you’re going to need the Modern AGE Basic Rulebook, the Modern AGE Companion, and the Threefold setting book. The unusual part here is you want to figure out the trickster god’s powers first, to figure out what level character they need to be.

Naturally, we need the Master degree in Illusion Arcana (Modern AGE Basic Rulebook), which requires three talent advancements. Our deity needs to be a bit stronger and tougher than mortals too. Going by the guidelines in the Modern AGE Companion, a x2 multiplier to Strength (Jumping) and Strength (Might), along with 2 points in Vicious Blow as a favored stunt, requires four talent advancements and represents sufficient strength as portrayed in…let’s say some popular streaming program in which such a character might appear. We’ll add +2 to the character’s Toughness using a magical version of the Dermal Armor enhancements. This costs two more talent advancement “slots.” That brings us to 9 degrees’ worth of advancements. A 7th level Modern AGE character has this many talent advancements available, but it’s not just about the powers, so let’s make our trickster god 10th level.

With that settled, we need to devise the basic Level 1 character, then work our way up through these advancements.

For background, we’ll look at the Threefold rules for ancestries. Let’s say our trickster god is actually an Arvu, one of the magical varieties of humanity (these are elflike) found in the setting. Maybe this god was adopted, eh? In any event, we can swap one background benefit for the Arcane Education ancestral trait, providing a rank in the Illusion Arcana, and the Trickster trait, which provides social stunt advantages which fit the character. Grace provides a similar benefit for other stunts, so we’ll take that. That’s three out of four background benefits. For the fourth, we’ll go outside the available rules and wing it a bit. Optimates like our trickster typically have the primal being quality on p. 139 of Threefold, which gives them social bonuses with beings who know them and allow them to understand Shabda, the universal language. We’ll treat this as a fourth ancestry trait.

For profession, we’ll pick Planar Envoy from Threefold as something the god’s parents probably wanted them to do, and which they sort of still do, in a twisted fashion. That’s 15 + Con Health, Resources 8, a degree in the Inspire or Linguistics (we’ll choose Inspire—Shabda knowledge means they effectively know every language already) talent, and either the Communication (Persuasion) or Intelligence (Current Affairs) focus—we’ll take Persuasion.

What about drive, our tricker’s “glorious purpose?” Let’s go with Achiever—the trickster has grand dreams, but may not be sure of exactly what they mean. That lets us pick Expertise or Inspire talent degrees. We already have a degree in Inspire, so we’ll take Expertise in Communication (Deception) in the sub-field “supernatural trickery.” We also get a Membership, Reputation, or Resources improvement. We’ll take Reputation: “Trickster God.”

From this point onward, we’ll use the Buying Abilities option on p. 12 of the Modern AGE Basic Rulebook to give the trickster Accuracy 0, Communication 3, Constitution 0, Dexterity 4, Fighting 0, Intelligence 2, Strength 0, Willpower 3—but be aware this is for a young trickster at level 1, and not the full-powered deity we want to emulate. With 9 other levels providing another 9 points in abilities, we can make them fully glorious—and get the talent advancements, additional focuses, and specializations to perfect our trickster according to plan.

(Stats separated by slash are for Gritty/Pulpy/Cinematic Modes, respectively)

Ancestry Traits: Grace (With a Flourish or Oozing Confidence stunts for -1 SP), Trickster (Taunt and Class Clown stunts for -1 SP), Primal Being (spoken and written Shabda; +2 SP in social stunts against beings who have heard of them, who also gain +2 to tests to find out about them)

We’re missing equipment, Relationships, and a few other options, but this character is reasonably trickster-god-ish, and about twice as strong as a human of the same build. They can summon illusions easily and have several advantages when it comes to lies, betrayal, and the rest of a trickster god’s habits. Perhaps, in an alternate universe, they might have focused on direct mind control, but in the end, you’re left with the treacherous hand history deals you—or at least, this history. Next time, we’ll be looking at what our trickster might do in the Threefold Metacosm. Perhaps they work with an agency that prunes undesirable timelines. Isn’t that a thought?

So You Want to Play a Dimension Hopping Trickster God for Some Reason, Part...
Scroll to top