The call goes out: Giant spiders stalk the city. Bystanders have seen their leader in the form of an enormous arachnid or a strange woman. Warriors hardened by assaults on Hell itself hunt her on a mission of vengeance. The Metacosm-spanning criminal conspiracy called the Krypteia seek her too, to profit from her powers—or whatever secrets they can steal from her corpse. But why is the spider-goddess Vabhis on Earth, and how can you stop her from revealing the existence of many worlds to the public—or keep the public safe when her children get hungry? 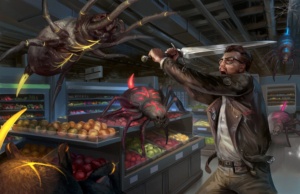 Hunting Night is an adventure for Modern AGE characters levels 1 to 4 in the Threefold setting, though with some adaptation it can be used for other Modern AGE campaigns. For full use of the adventure, the Modern AGE Basic Rulebook and Threefold campaign book are required.

This adventure can stand alone, but it’s also the first part of Five and Infinity adventure series, which takes your Modern AGE Threefold characters from levels 1 to 16.

…and generate your own adventures with Chapter 0