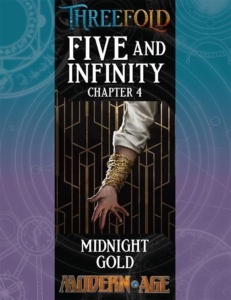 Demetrius Bassei came to the Netherworld of Mar Saothair to win back his son’s lost soul at the Midnight Gold, the plane’s foremost casino. He never returned. Now it’s up to your heroes to dare this hell dimension of endless cities and spirit-flensing factories, where demons gamble over the souls of the damned and the merely unlucky alike. In Mar Saothair, bodies and minds crumble before the demands of endless urban toil, but debt is eternal. Who will you save, what will you win, and who do you owe?

Written by Crystal Frasier, Midnight Gold is an adventure for Modern AGE characters levels 9 to 12 in the Threefold setting, though with some adaptation it can be used for other Modern AGE campaigns. This adventure takes us to one of the Threefold Metacosm’s Netherworlds: hellish dimensions ruled by infernal overlords

For full use of the adventure, the Modern AGE Basic Rulebook and Threefold campaign book are required.

This adventure can stand alone, but it’s also the fourth part of Five and Infinity adventure series, which takes your Modern AGE Threefold characters from levels 1 to 16.

Save the Damned, If You Can Afford It

Get Five and Infinity Chapter 4: Midnight Gold at the Green Ronin Online Store or DriveThruRPG