Well, it’s been an interesting run, but it’s time to move on.

Starting in October I’m going to be leaving my position as Fantasy AGE developer and thus my regular position at Green Ronin. This has been awhile in coming—I’ve known for several months I needed to make a change.

Why? Well, it’s complicated. But mostly? I’m tired. After several years of personal tragedy, heavy workloads, financial and health issues, the occasional resurfacing of past harassment, and so on? I feel a bit like Egg Shen at the end of Big Trouble in Little China:

My work is done. Lo-Pan is dead, the evil spell has been lifted, years ago I promised myself a long vacation…and it’s time to collect.

That’s not entirely accurate of course, but metaphorically? It’s appropriate. For the past several years I’ve been keeping everything going as best I can. Maybe not always as well as I could in a perfect world, but keeping things moving forward as best I could.  I’m proud of the work done; I’m especially proud of the talented folks I worked with making the various books in the Fantasy AGE and Dragon Age lines, as well as the Blue Rose core book.

However, the Fantasy AGE line needs someone who really wants to work on it. Which, despite my aforementioned pride in the work done? That just isn’t me anymore. I’ve walked this road about as long as I can or want to. Again, that’s not a slam on the work, the people involved, fantasy, gaming, or anything else the line intersects with. It’s just where I am now.

I’ll always be happy I took this gig. It was the right thing to do at the time. I’ll always be proud of the work done. And it’s possible you’ll see me again on various Green Ronin projects, either as a freelance writer or maybe even a developer if the right specific project comes along.

Never can tell with me.

And I’m not going to be a hermit or anything. I have four more books for my wu xia/kung fu game, Tianxia, to finish, there are three more John Carter of Mars books in the pipeline and even 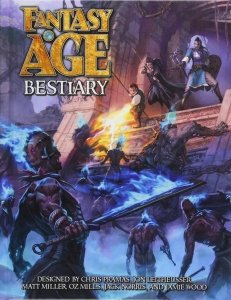 some other work past that.

But damn, I am worn out. And since I still have a lot of things I want to design, write, create, and so on in the future? I needed to let something go so I can recharge, rest, repair, and then do those things. After a lot of consideration, this was the thing to let go.

So, I wanted to end by saying thanks to the fans and customers for their support and enthusiasm. To Green Ronin, I want to say thanks for the opportunities to put my stamp on not one but three of the company’s lines (and that’s not even counting the various Mutants and Masterminds projects I was able to contribute to). To Fantasy AGE’s new developer, Owen K.C. Stephens, I want to express my heartfelt enthusiasm and well wishes. I know you’re going to do great. To my various collaborators I want to give my love and appreciation; literally couldn’t do it without you. In particular, I want to give a shout out to Jamie Wood and Matt Miller, two fine freelancers who started on Dragon Age with me and kept working to the current Fantasy AGE projects. While there were so many great folks on various books, you two were always there when I needed you, and that’s appreciated.

And to my fellow Ronins, while it wasn’t always easy or smooth…we really shook the pillars of heaven, didn’t we? 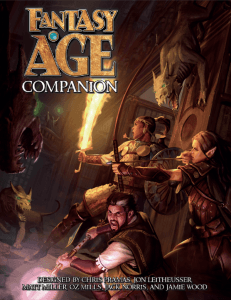 “Just when I thought I was out, they pull me back in.”
Michael Corleone. The Godfather, Part III

Okay, that quote makes it sound like I’m unhappy to be back at Green Ronin, and nothing could be further from the truth! But let’s be honest, how often do I get to use an Al Pacino quote? I may not even be the Gamefather, much less the Godfather, but I know a good quote when I steal one!

Fans of Green Ronin as a company may recognize my name from my time as the Freeport/Pathfinder Developer, or my various freelance contributions to d20 game books Green Ronin has been so kind to include me in over the past two decades, but folks who are primarily fans of Fantasy AGE are likely to have no idea who I am, and I’d like to take a chance to introduce myself.

I have just a couple of small AGE credits, dating back to some GM advice of mine that got used in Dragon Age. But to be entirely up-front, my professional expertise has primarily been in things adjacent to D&D and Pathfinder, so taking the role of Fantasy AGE developer takes me into new territory professionally and I’m extremely excited about that. 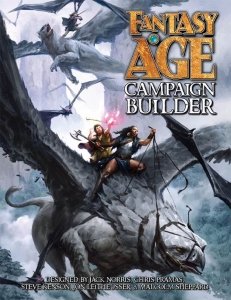 I think Fantasy AGE is one of the most dynamic and exciting RPGs to come along in the past decade, and I couldn’t be happier to be involved with its evolution going forward. Jack’s done a tremendous job shepherding from his first involvement with it to this point, and I want to take a moment to thank him for his hard work on the line, which is in great shape as he and I arrange for the hand-off of projects currently underway.

I don’t officially take the reins until October, but Jack and I (and the rest of the awesome Ronins) are already working at making sure things transition smoothly. We’ll have exciting new things to announce eventually, but for now I just wanted to take a moment to introduce myself, and give people time to get used to the news.