Ships of the Expanse is coming to a spaceport near you soon! In my last transmission, I presented overview of what all is in the book, but now I’m going to get into some of  the nuts and bolts.

The Expanse RPG presents  a solid basis for spaceship rules. There is more than enough information provided to set the stage for exciting adventures in space and breathtaking ship combat. Ships of the Expanse takes the framework laid out in the core rulebook and builds upon it to give the players and Game Masters more options for play and more opportunity for drama. Ships provides players and GMs with a lot of new styles of play, including being merchants, smugglers, prospectors, or even pirates.

Players interested in being merchants will be excited to find in-depth rules for buying and selling (and smuggling) cargo. There are charts, tables, and guidelines for buying and selling cargo and taking on passengers. These include Income modifiers and possible risks and complications. You’ll also find rules and details for prospecting for those who want to search the belt for ice and ore minerals. Of course, everything in this book is entirely optional, and players and GMs can pick and choose which rules they want to add to their campaign and which they want to ignore and keeping in line with the core philosophy of The Expanse RPG, these rules aren’t overly cumbersome and are intended to enhance rather than bog down gameplay.

Ships of the Expanse gives you costs and details for making post-market modifications to your ship. There are also Income rules for purchasing and repairing ships as well as selling salvage. Now you know exactly how much it costs to add hull plating or install a torpedo launcher. There’s also quite an extensive list of new Qualities and Flaws for ships. Here are a few to wet your appetite: Increased Acceleration (makes it easier to increase or decrease range), Gourmet Galley (might as well eat well on those long journeys), Drone Bays (keep drones on hand for ship repair, reconnaissance, or even combat), High-Charged Rail Guns (you know you want one), Advanced Security Systems (to keep nosy spies off your ship), Advanced Targeting Systems (make sure you hit your target), and much more. 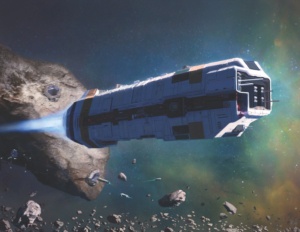 You’ll find many and expanded rules for combat. There’s a greatly expanded list of command stunts as well as the inclusion of fleet stunts and the option for individual crew (pilot, engineer, electronic warfare, etc.) stunts, and guidelines for creating stunts on the fly. Fire up your Epstein and go in weapons hot with new ship maneuvers, including using debris as a shield, skimming planetary atmospheres to shake pursuers, hacking other ships, and utilizing torpedoes for point defense. All of this only begins to scratch the surface, so this is a book that Expanse players are not going to want to miss.

And don’t worry, I didn’t forget the most important part – the new ships! Keep your comms open for my next broadcast, where I’ll get into details on all the cool new ships and deckplans!

Ships of the Expanse: The Ships and Deck Plans
Scroll to top