While The Blue Rose Adventurer’s Guide makes use of the core Fifth Edition spells and spellcasting classes, it does make a few adjustments to reflect the nature of magic and the Arcane on Aldea.

Aldea is a highly magical world, where adepts not only wield considerable power, but have transformed the world through its application, making life better and easier for people. Unfortunately, that same power has been misused by the corrupt, nearly destroying the world as well.

Aldeans commonly use the term “adept” to refer to those awakened souls able to use magic, although technically the term is for those who have mastered such abilities; in the Old Kingdom, adept was a title similar to “master” in a craft, the achievement after apprenticeship as a student and graduation to independent practice. Now, among the uninitiated, the term is often confused for those who simply possess arcane talent, even if they lack training and skill. “Adept” often refers to anyone able to cast spells.

Aldea’s plane is particularly isolated from other planes of existence, so much so that the shadow-gates were the only known means of breaching the barriers between planes. Thus magic and spells reliant on contacting other planes or summoning creatures from them either work differently or do not work at all on Aldea without the use of a shadow-gate. The following spells are non-functional on Aldea without the use of a shadow-gate: conjure celestial, contact other plane, gate, planar ally, plane shift, teleport, and teleportation circle. 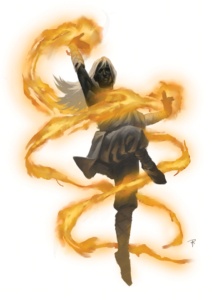 Aldean philosophers and scholars theorize that arcane power ultimately flows from the soul, and that the Souls of the Eternal Dance all possess at least the potential power wielded by the gods themselves, who created and shaped the world from the Sea of Possibility. Of course, those selfsame souls are now embodied and have forgotten much of their divine nature, but a spark of that still remains within every soul, and some find and draw upon it to wield magic in the world.

Also like the god Anwaren, the souls of the Dance are vulnerable to the lure and temptation of Shadow, particularly when wielding the power to influence and transform. When the arcane arts are used to usurp the sovereignty of another soul, there is resistance, a backlash from that soul’s divine nature. In essence, when the arcane is used to alter another person’s body, mind, or soul without their consent, it can corrupt the soul of the adept. Aldeans refer to magic that does these things as occult, for such things are obscured by Shadow.

Old Aldis created many arcane wonders long ago, and the Shadow Lords who followed it often used their powers to create terrible and powerful items, some of them cursed. Some of these objects from both eras of Aldean history still exist, although the secrets of their making have been lost. The Blue Rose Adventurer’s Guide describes more than three dozen unique magic items found on Aldea, including seven artifacts.