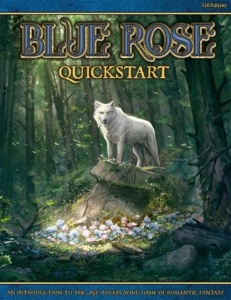 This week sees the release of a Quickstart for our Blue Rose AGE roleplaying game. Green Ronin’s Quickstarts have always served to whet the appetite for a game, a compact and easy-to-use set of rules and an adventure scenario that needs nothing more than the Quickstart itself and some dice to get right down to playing.

The Blue Rose Quickstart is no different from other Quickstarts in that regard. But it also serves as an appetizer for another aspect of Blue Rose: its unique romantic fantasy setting. Blue Rose is one of several AGE games in our line of excellent offerings, but it is also an original setting, paying homage to the worlds of romantic fantasy fiction as it does.

To that end (without giving away any spoilers), we knew that we needed to highlight an important aspect of that genre: specifically, that while in much of traditional fantasy, the wilderness is a place of danger, in Blue Rose, the wilderness is much more than that. Certainly, there are risks for venturing out into it, but it is also a place of great beauty and serenity, a place aligned with the heartbeat of the setting’s spirit.

For this reason, the Blue Rose Quickstart’s adventure The Rhy-Wolf’s Woe takes place in the vast wildernesses of the Pavin Weald, a primordial old growth forest that is home to monsters and spirits and rhydan (the sapient psychic animals of the Blue Rose setting, who are among the player character types available for play!). This adventure was written by Stephen Michael DiPesa, and it captures so much of the spirit of Blue Rose perfectly.

Also important to the Blue Rose setting are its cast of diverse characters. To highlight those, we had April Douglas craft for us a set of nine pregenerated characters. Rather than a motley band of barely-connected adventurers, however, April gave us something distinctly Blue Rose-like: the Family Nightsong, an extended family of remarkable people. Though built around a constellation family (as a marriage between three or more folk is called), the Family Nightsong is more than that. The types of connections between its members range from spousal to parental to filial and more. The Nightsong folk may not all be related to one another, but there is no doubt: they are family, at day’s end.

So join us! If you’ve never played Blue Rose AGE before, download the Quickstart, get some friends together over Discord or Zoom, and give it a spin! And if you like what you read and play, you’ll find that the first adventure included in the Blue Rose AGE core rulebook is also in the Pavin Weald – so your next adventure is right next door!

See what else we have for Blue Rose here!

A Blue Rose Chronicle, Designing Envoys to the Mount
Scroll to top Skip to content