Over several articles in this series, I’ve talked about a few insights I’ve acquired playing a Threefold setting Modern AGE campaign in a bit of depth. Over the past while, however, things have become a bit more scattershot. So, think of this time around as a grab-bag of insights about Modern AGE and Threefold, and RPGs as a whole, that I hope you’ll find interesting. 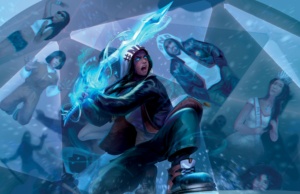 Sometimes there are just too many damn universes. From Five and Infinity, Chapter 5.

I Got My Character Wrong

Last article I told you about my character…but I took a disallowed focus! Andrzej took Longarms for 8th level, but he’d taken Pistols at Level 7, breaking the rule that says you can’t take a focus for the same ability twice in a row. (You also can’t improve the same ability twice in a row.) Yes, I, the Modern AGE developer, forgot that. As a wise being once said, Pobody’s Nerfect. The reason for this rule is to encourage characters to develop in a balanced fashion. I took Fighting (Grappling) instead—still combative, but it doesn’t make me look like I only learned gun things for two levels.

Stunts Can Be Minigames

Now that we’re a bit more experienced and are digging more deeply into the stunts, it becomes apparent that some stunt sets are, in effect, minigames within the larger Modern AGE rules. Grappling, Investigation, and some social stunts from Modern AGE especially tend to work this way, where there are various options and counter-options in the stunt list. For instance, Takedown has advantages (extra damage) and disadvantages (opposed test, you fall prone as well) over the simpler Knock Prone, and contextually, Human Shield may be a better choice than either, in some situations. In play, Knock Prone is generally a better idea with single, tough opponents a team can gang up on, Takedown is superior for one-on-one combat, and Human Shield works best for a larger number of ranged attackers. These are insights into an emergent property of the rules that I think will influence my future work in AGE games. 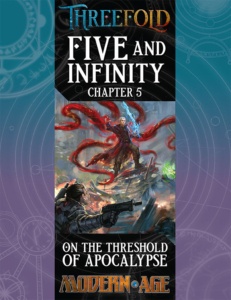 Right now, the campaign revolves around plans by a rogue alternate-universe version of the Aethon’s plans to make their own timeline the “true” one, or primeline, instead of our Earth (well, minus the existence of everything in Threefold). What does that even mean? According to the GM, it would destroy the primeline and wreak havoc with every other plane of existence, and the secret to shifting which Earth is the primeline is an algorithm processed by a sufficiently large group of god-computers called Machinors. The great thing about these answers is even as the setting’s creator, I didn’t know that. I have opinions regarding various things, and the Five and Infinity adventure On the Threshold of Apocalypse presents one possible scenario, but I’m not really sure how that works. Inspiring ideas by not providing all the facts is nothing new, but this has given me an idea of the most effective ways to do this. In this case, we left a hook in Threefold indicating the primeline had changed before, and of course we talked about deleting alternate Earths, so these big structural ideas were just waiting for a bold GM to mix them together.

Long term play has also raised a few questions and options about Modern AGE and Threefold rules, but these are a bit out of step with the general tone of this article. Next time I’ll give them a go.

Keeping the Creative Panic at Bay (A Ronin Roundtable Guest Post by ’Nathan...
Scroll to top Skip to content