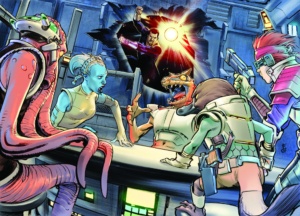 The Astonishing Adventures line blasts off into space this week with our very first cosmic adventure, Prodigal Sun by Larry Wilhelm. The heroes travel to a star system colonized by the Lor Republic shortly before its collapse to investigate why the sun has suddenly turned an ominous red hue. While there, they’ll need to navigate local politics, survive an angry space minotaur, and come head-to-head with a few fan favorite starfarers if they hope to survive and save the four worlds of the Flegere System!

One of the fun tropes in cosmic comics is the notion of lone heroes armed with nothing but their trusty power ring and cosmic skateboard tackling entire massive ships and fleets of fighters, and Prodigal Sun delivers. To capture the feel of facing a massive ship bristling with guns, the adventure gives these powerful vessels multiple attacks in a single round. While there aren’t any formal rules for this in Mutants & Masterminds—heroes and villains alike are limited to a single attack each round—you can borrow the same balancing system I used for your own villains. 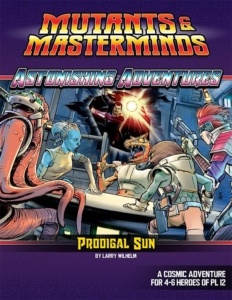 The action economy—the ability for a character or monster to attack more than once in a round—is a key factor in balancing the power between villains and heroes. Heroes can break this balance by spending Hero Points, but Hero points are a limited resource and one that usually only comes from setbacks. Giving your villains the ability to attack more than once makes them more dangerous, but isn’t game-breaking because Staggering or Incapacitating them removes all the attacks they might inflict in a round.

Consider the following to make a rapid-fire villain:

These rules are fairly simple and you can use them on the fly to make a single villain more challenging for a group, but be careful not to overuse them. These are best applied to weaker foes you want to keep the heroes busy, as a deluge of high-level attacks can easily overwhelm your team.

To set an example, you can turn the airborn villain Talona into a fast-moving and deadly (well, deadlier) opponent by giving her the ability to attack more than once a round.

Looking at her character sheet, Talona’s Flock of Raptors Affliction is her most powerful attack, and so becomes her primary attack. Her claw attacks are only the equivalent of PL 10—two lower than the power of her Affliction—so she can use them twice a round as her secondary attack. With the benefit of her Move-By attack, Talona can spread out the hurt among the heroes while keeping some of them off-balance with a hostile flock of angry hawks.

This rapid-fire Talona is the equivalent of a PL 14 threat—a beefy adversary and a fair fight for an average team of four PL 10 heroes.

Give the rapid-fire rules a try at your own game table and let us know what you think!