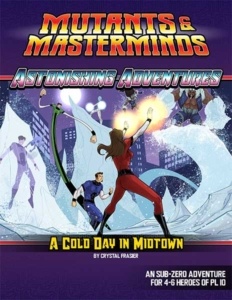 Engaging setting details are one of the keys to producing exciting encounters and adventures in Mutants & Masterminds. Players will remember their epic fight atop a frozen crane which is buckling under the added weight of its ice, threatening to topple onto the streets below, a lot more than another battle in a 30 by 50 foot rectangle. A Cold Day in Midtown is one of those (astonishing!) adventures where the environment is as much an opponent as any of Madame Zero’s gathered rogues. GMs can lean into this frozen wasteland to really make this adventure shine and to increase the challenge facing their heroes.

The Gelid engine, Madame Zero’s newest doomsday device, is a constant obstacle for the heroes, and GMs should feel free to emphasize the damaging environment it is creating. In the adventure itself we call out these specific setbacks caused by the device:

Consider just the first point here. That progressive cold can wreak havoc on an unprepared party. Basically it means that as the adventure goes on there are more and more chances for the heroes to become fatigued, then exhausted, then even incapacitated. That in of itself limits the amount of power stunting the characters can attempt, while increasing the amount of time it takes to accomplish their goals as their Speed ranks fall. All important factors when considering by the end they’ll be fighting as many as five assembled supervillains. It’s important to keep track of the passage of time in this adventure, as that determines how many Fortitude rolls the group will be making. Once per hour in Scene 1 and 2. Once every ten minutes in Scene 3 and 4 and once every minute in Scene 5. 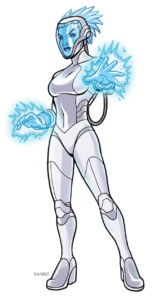 The other setbacks, icy roads, high winds, and impeded visibility are also nothing to scoff at. These obstacles will affect everyone in the group, even those who are immune to the environmental cold. GMs seeking to challenge their groups further can come up with additional consequences of the Gelid Engine’s use. Perhaps snow banks build high enough throughout the city that regular land travel becomes next to impossible without Athletics or Acrobatics checks or Movement powers. Maybe the white out conditions provide a circumstance bonus to Stealth or outright Concealment for the VLPES Mercenaries moving throughout Freedom City. You could even have sporadic hail storms (Burst Area Damage 1-5) either produced by the Gelid Engine itself or from ice formations falling from skyscrapers add extra danger to failures on the various skill challenges throughout the adventure.

In summary, A Cold Day in Midtown is an excellent showcase of the ability for Environment (both as a power and as set dressing) can have on crafting memorable adventures in Mutants & Masterminds. Make that frozen wasteland as much of a character in the story as you can. With all of the tools at your disposal, even characters immune to cold will be hard-pressed to succeed. The more you lean into the dangers of the Gelid Engine, the more your players will feel the biting cold of Madame Zero’s Cold Front.

Astonishing Adventures: A Cold Day in Midtown is available now in the Green Ronin Online Store, and on DrivethruRPG!

So You Want to Play a Dimension Hopping Trickster God for Some Reason, Part...
Scroll to top Skip to content