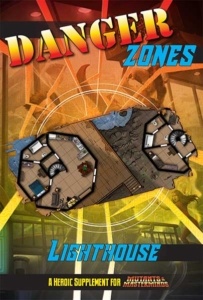 Lighthouses conjure up all kinds of images of moody, Gothic stories of mystery, hauntings, and murder along isolated, lonely coastlines, and those are just some of the things explored in this week’s Danger Zones: Lighthouse  release. Our weekly Mutants & Masterminds Monday live-stream talks about some of those themes involving lighthouses and the occult adventures in the Supernatural Handbook, but that is by no means the sole opportunity to have a lighthouse appear as a locale in your Mutants & Masterminds game.

Lighthouses often play a role as the interface between land and sea, making them important to aquatic superheroes, for example, or their supporting characters. It would not be at all unusual for an aquatic hero to live at a lighthouse or work as a lighthouse-keeper in their civilian identity. Such a hero might also have a lighthouse-keeper as a friend, family-member, or love interest. Similarly, an aquatic super-villain might also make use of a lighthouse as a touchstone on land and a potential hideout. Perhaps someone like Devil Ray from Freedom City or Steelhead (or any of the Trident from Threat Report) use connections to a lighthouse keeper to blackmail them into helping provide a safe-haven or base of operations.

As lighthouses are already watch-posts (the Freedom League’s orbiting satellite is even named for one), they can also be potential headquarters for a superhero team based in a coastal area. The lighthouse described in Danger Zones is only three stories tall, but duplicate the second floor map a few times, and it could easily be a five- to six-story lighthouse with room for an entire team. Even more so if there are hidden sea-caves or the like beneath the actual lighthouse structure, with room for a submersible or the ability to launch an aircraft up out of the water.

It’s also difficult to think of lighthouses in the Earth-Prime setting without thinking of the Beacon, one of Freedom City’s lesser-known legacy heroes (described on page 58 of Freedom City, with the Light-Bearer template on page 69). Perhaps a new Beacon, or even a team of heroes who inherit the potential of the Living Light, might set up shop in a lighthouse along the coast or on an island near Freedom City, shining the light of hope in the darkness for all in need.

However you might use it, check out Danzer Zones: Lighthouse and all of the entries in the Danger Zones series for your Mutants & Masterminds and modern RPG adventures!

Danger Zones: Lighthouse is available now in the Green Ronin Online Store, as well as on DrivethruRPG!

Living in Dev-Time
Scroll to top Skip to content