Hi, I’m Jaym Gates, Line Manager for Green Ronin’s Nisaba Press. We’ll be publishing fiction tied in to the Green Ronin properties, both short fiction and novels. I was given three missions: make a great fiction line, make sure it was a great diverse fiction line, and find some great new voices for both fiction and RPGs. That’s pretty much the most exciting mission plan you could give me, for anything. Why? I got into editing because I discovered how amazing it was to find those incredible new voices that no one else has found yet. There is also something intensely rewarding about taking a good piece of fiction and refining it to its best form.

As we’re releasing our first batch of regular stories, I wanted to talk a little bit about tie-in fiction, and why Nisaba.

First off, one of the best things about tie-in fiction to me is that it gives fans new stories and elaborates on beloved settings. Flavor text in RPG books is great, but sometimes you really want to go on an adventure with characters. See the sights of Emerald City, smell the sweet reek of Freeport, maybe feel the wind on your face as Rezeans gallop across the plains. While we can’t LITERALLY give you all of that, fiction gives windows to the new and existing characters in our settings. Maybe they’ll inspire new adventures, show up in your existing adventures, or just be a brief excursion with a fictional friend, but any way it goes, we love giving fans the chance to interact at more length with our settings. 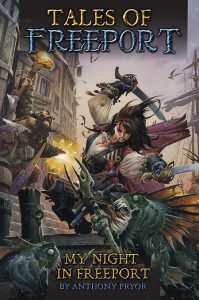 It’s also a great way to get your RPG fix if you don’t have time to game, are playing another game, or can’t get a good group. It’s like talking to an old friend you don’t get to see often enough.

Secondly, tie-in fiction is a great way for new fans to get involved. There are a lot of settings, a lot of rules, and a lot of history. It can be scary for someone to just jump in at the deep end with no idea what’s going on. A short story or novel takes away that overwhelming feeling of “SO MUCH STUFF” and gives the reader a gentle introduction to a new place.

And last but not least: because the world is made of stories, and stories allow the creators to develop things that might never come up in the RPGs, or that might just not have been thought of. Narrative is a unique thing that forces you to think of so many angles that you might not otherwise see. The scents and sounds of a world, the interplay between character and their religion, questions of morality and honor. A story fleshes out what the RPG has built to a level that flashes and flavor text can’t approach.

So that is “Why tie-in fiction.” I’m really thrilled with the stories I’ve already been working on. We have Anthony Pryor’s My Night in Freeport, Lindsay Adam’s tale of an Aldean agent and a Jarzoni priest-adept, Eytan Bernstein’s story of Kid Robot’s first day of school, and so much more. All of these are original fiction set canonically in the settings you know and love. My hope is that they bring another aspect of engagement and joy in the setting.

And keep an eye out, we’re planning to host an open submission period in a few months, so if you’re wanting to write fiction for Blue Rose, Freeport, or Mutants & Masterminds, get plotting now!