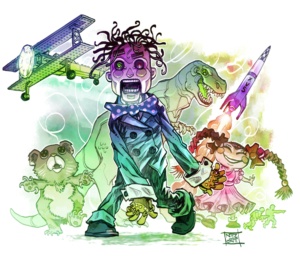 Nobody heard him, and nobody saw,
His is a picture you never could draw,
But he’s sure to be present, abroad or at home,
When children are happy and playing alone.

—From A Child’s garden of Verse, by Robert Lewis Stevenson

This week’s release of Astonishing Adventures: Three Made One concludes the NetherWar adventure series with a bang and brings back plenty of old friends and enemies the heroes have encountered over the last five adventures, including Sandstone, Medea, the Factor Four, Sallah, Seven, and more side characters than you can shake your character notes at. There are moving parts galore and possibly one of the toughest villain fights yet printed for Mutants & Masterminds, Third Edition!

But one recurring face doesn’t make an appearance in Three Made One. The phantom toy elemental, Toy Boy, sits this one out. This isn’t incredibly unexpected—the heroes defeated Desmond Lettam pretty thoroughly at the climax of Broken Strings, potentially trapping the spirit villain in a legendary Orb of Ghormmuz where he can no longer hurt others. But Toy Boy was a fairly major element for three installments of NetherWar and depending on your group’s interactions with the villain, his absence in this adventure may feel like a glaring omission.

Una—the fawning Desmond’s “Dark Lady”—immediately turns her back on her failed agent upon his defeat. While he was eager and could communicate with Una directly, his work was complete and his usefulness drew to a close during the events of Broken Strings. Una has other agents she can turn toward destroying the last Eldritch Talisman, the Golden mask of Malador, and so Toy Boy’s absence means nothing to the ambitious would-be god. But Desmond Lettam has never taken rejection well.

Here are a few options for featuring Toy Boy in Three Made One:

The Boy in the Orb

If the heroes capture Toy Boy in the Orb of Ghormmuz, he remains their prisoner as the adventure opens and is drawn into Elysium with them, though the dimension’s magic shifts him from the heroes’ immediate possession to their headquarters’ trophy room (assuming he wasn’t there already). Desmond rails against the heroes, hurling insults and accusations, but doubt has begun creeping into the back of his mind. A part of him knows he’s been forgotten by the only person he cared about, and if the heroes play to that they can turn the villainous ghost into an information source.

You may decide that releasing Toy Boy from the orb is one way the heroes can escape Elysium. His powerful emotional ties to Una allows him return to Earth-Prime like Malador’s Mask once did, bringing the heroes along for the ride. Once back on Earth-Prime, however, he only remains with the heroes if they’ve treated him well during his imprisonment; Desmond hasn’t turned over a new leaf, he’s just angrier at Una for rigging the game, than he is at the meddling heroes who spoiled his fun.

Toy Boy knows only bits and pieces of magic lore, but he knows a lot about Una and her ultimate goals and can help the heroes by providing an Aid bonus to their checks to investigate Triune, and if the heroes have been extraordinarily understanding or can provoke Una into confirming Toy Boy’s worst fears about his abandonment, Toy Boy can even join their final showdown with the Dark Lord as an additional magical ally who helps delay Triune’s reunification.

If the heroes never imprisoned Toy Boy during Broken Strings, the ghostly villain has finally escaped the Dungeon Dimension only to discover his Dark Lady has forgotten him and recruited Medea as her new favored agent. While happy to sulk for a time, Triune’s ascension is enough to snap Toy Boy out of it and either drive him to beg the newborn to accept him as a servant or else his bitterness drives him to seek out the heroes.

If Toy Boy seeks out the heroes to help them, he might be one element to help draw them out of Elysium or clue them in that the world isn’t what it seems. You can present Elysium as far more realistic, with only recurring toy-based elements seeming out-of-place until Toy Boy grows strong enough to approach the heroes on his own. Much like when he is trapped in the Orb, an independent Toy Boy can help the heroes investigate Triune upon their release or act as an incorporeal spy and go-between for the various factions, helping the heroes coordinate with their allies—not that Desmond is a completely trustworthy ally who won’t create new complications for the heroes to resolve. He may likewise serve as a mystic ally in the climax to help delay Triune’s re-assembly or he can play a similar role to Medea as an emergency back-up in case one of the established heroes is incapacitated.

A Toy Boy rejoining Una’s side becomes one of Triune’s dread guard, the Wings of Doom. Use the Terror Teddy statblock from Broken Strings to reflect the new doll body Triune creates for him, or use one of the existing villain archetypes from the Deluxe Gamemaster’s Guide, such as the Brute (an enormous toy dinosaur), the Composite (a toy box), the Hybrid (an Immature Radioactive Samurai Squirrel action figure), or the Robot (a transmorpher). This version of Toy Boy operates as a lone hunter tracking the heroes as they explore the city and investigate Triune.

Among the rewards that you can hand out at the adventure’s climax might be a second chance at life for the troubled Desmond Lettam, whose disability and the sheltered life his parents forced on him only fueled his emotional problems. If the heroes go above and beyond to bond with an imprisoned or allied Toy Boy, Desmond might sacrifice himself to save a hero from an especially vicious critical hit from Una the Evolved during the final confrontation. Una’s magic allows her to shred spirits as easily as flesh and Toy Boy—with his innate +0 Toughness bonus—has little chance to resist the overwhelming force she can apply. Depending on the tone of your campaign, this might be a bittersweet end for a troubled soul, or the mystic shock and the transformative magic following Triune’s defeat might restore Toy Boy to life, either as his old self or as a young child with a second shot at life. Heroes might return him to his aging parents or turn him over to the state, or adopt the reborn villain as their own and hopefully give him a healthier environment in which to grow up as second time.

Astonishing Adventures: Netherwar part 5 Three Made One is on sale now, and also available on DrivethruRPG