A number of weeks ago, I was invited by Juce of Master the Game to take part in a three-act Blue Rose campaign he is hosting on his YouTube channel. Before we launched into the full campaign, however, our Narrator Aaron wanted for us to do a Session Zero, to talk about the concept for the campaign, establish content limits, and to create characters. 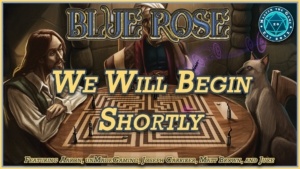 I don’t want to give too much away, as it’s a fun watch (if we do say so ourselves). In particular, I appreciated the open creativity the other players approached the entire session with. There were folks with some familiarity with Blue Rose and others who’d only ever been introduced to it after their invite to this very game.

I ended up playing Tesera, a rhy-cat Expert who was raised in the city of Aldis. Urbane and sophisticated, she aspires to serve on the Rhydan Council someday (her mother is part of the council). She’s sort of an odd rhydan, though, because of her background – she has never lived in wild places before and is not particularly well-suited to wilderness areas. (She does love a well-cultivated garden, though!)

Because rhydan and the rhy-bond are something I consider to be sort of central to the Blue Rose experience, I asked if any of the other players wanted to play my bondmate. I ended up with a rhy-bond to a young vata’an adept who fled theocratic Jarzon. He seems a touch repressed and even a little ascetic, so obviously the Light paired us up so that Tesera can teach this poor deprived soul how to live a little!

We also have a young adept who joined the Roamers when he was younger, but who has now joined the Sovereign’s Finest because, well, he sort of harbors one of those courtly, from-afar type of infatuations with the beauty of the Queen, and he’s sure that being a national hero will get her to notice him. Surely. The other is a woodsman warrior who was raised in the Pavin Weald and is very comfortable in wild spaces, but a little less so in settled lands. (Honestly, Tesera kind of resents being around him because he’s SO much more comfortable in the wild than she is, and she’s pretty sure that makes her a bad rhydan.)

Because one of the campaign themes is love (not just romantic), Aaron opens the session with each of us – as players – answering the question: “When was the last time you felt loved?” The answers were warm and delightful, and really helped to set the tone for the collaborative process that followed.

Please take a gander for yourself, and we hope you’ll join us on game days!