Ships of the Expanse is so close we won’t even experience any time delay on this transmission. Ty has signed off on the book, and it’s off to the printers. Since we’re so close, I thought now would be a good time to talk about combat.

Let’s begin with stunts. We added a bunch of new command stunts to the original list to allow for some even crazier maneuvers, including my favorite, Burn Them, which allows a ship to use its Epstein drive as a weapon. (I know I mentioned this in a previous RRT, but I think it bears repeating.) There is also Down with the Ship, which allows the commander to expend their own Fortune to remove damage taken by other characters (as the result of a Collateral Loss) onboard the ship. Or, Rapid Reload which lets you launch an extra torpedo. We’ve also added fleet command stunts and individual crew stunts, allowing the commander to give their generated stunt points to individual crew members to be used on their action. Crew stunts like Not My Ship! permit the engineer to sacrifice their own Fortune to protect the ship, or Steady as She Goes, which allows the pilot to lessen damage from a high-G maneuver.

Next up, the expanded electronic warfare section goes into things like hacking another ship’s systems or even wresting control of a torpedo that is being manually guided. The ship’s gunner gets a little love with systems for trick shots, firing weapons without an automated targeting system, and new rules for targeting specific systems. There is also an extensive section on all the different ways you can hide in space as well as more details on stealth technology.

But, who really wants to hide? Would you rather blow things up? We’ve got you covered with a whole section on alternative weapons. This includes flinging asteroids, making debris screens from shattered asteroids, and we get into the versatility of a torpedo. No longer are these just “fire and forget” weapons. We cover using torpedoes as mines, proximity torpedoes, and even using a torpedo as a point defense weapon. PDCs down? Fire a torpedo at that incoming torpedo! Of course, we’d be remiss if we didn’t revisit the nuke and get down and dirty discussing the absolute devastation these weapons can cause. 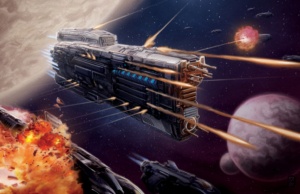 Information can often be the best weapon and now you’re armed with details about the expanded combat rules. The countdown has begun; deploy PDCs and get ready to make contact. Yes, that means the PDF should be out sometime THIS WEEK, with the print copies coming as fast as we can. As I’m sure most of you know, printing and shipping is still a little wonky due to COVID-19, but I promise we’ll have them in your hands as fast as we can.

If you pre-order a print copy, you can add a PDF for just $5 in our Online Store! You can also pre-order the book from your Friendly Local Game Store if shipping fees, or changing customs regulations has made getting the book difficult in your neck of the woods. We can even send $5 PDF codes to your local game store as well!