I don’t know about you, but from the very start of my career as a Game Master, I would steal from find inspiration everywhere: novels, comic books, television, movies, and, especially, other games. I mixed-and-matched elements from multiple superhero game settings and comic books with my own creations in my campaigns. I transposed and stitched together parts of different fantasy settings. The player characters from Gamma World, the first RPG I ever ran, eventually ended up via dimensional rift in the World of Greyhawk, running rampant through the Hidden Shrine of Tamoachan.

So when I got my eager mitts on Van Richten’s Guide to Ravenloft and began exploring the Domains of Dread therein, I immediately thought: “Redoubt from The Lost Citadel would be right at home here.” With that dark revelation in mind, dear reader, I immediately opened a new file, began to write, and here we are….

When exactly did the Last City, the Final Redoubt, find its way into the Mists? No one knows for certain. Indeed, most of the survivors of the old world of the lands of Zileska don’t even know the rest of their world is gone, since few venture outside the protective walls of the Last Citadel, and fewer still find their way back. Beyond the lush forests surrounding Redoubt, the trees and hills fade into the mists in all directions. All that emerges from the mists are the restless Dead and the few travelers unfortunate enough to arrive in the domain outside of the protective walls. They rarely last long, and strangers are viewed with considerable suspicion when they appear on the outskirts of Redoubt.

The people of Redoubt do not question the fate of the world beyond their walls because they believe they know it: The Dead have risen to reclaim the world. All of the great empires of the elves, dwarfs, humans, and others have fallen to plague and war and chaos, with their Dead rising to prey upon the living. The civilization of the living has fallen, and retreated, again and again, until this: The Accord of the Last Redoubt, the sole island of living people in the world, under eternal siege by the Dead, and more adrift than even they know. 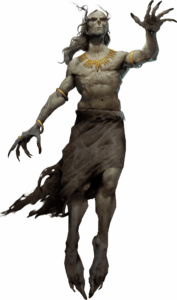 Is the Prince of Tears the Hidden Dark Lord of Redbout?

Who, or what, is the Dark Lord of Redoubt? Who commands its Mists and may seal or open its borders? Who, ultimately, is trapped here? It is one of the great mysteries of the domain, one ripe for exploitation by the Game Master.

The most likely candidate for Dark Lord of Redoubt is the legendary Bone Father, the embodiment of Death itself, who cursed Zileska and brought about the Fall. Of course, to the people of Redoubt, the Bone Father is a god—or at least godlike—and seasoned wanderers of the Mists know the Dark Lords, while powerful, are not gods. Perhaps the Bone Father is some powerful form of undead, such as a lich-necromancer, whose legend has grown over time along with his army of the unquiet dead, to the point where people believe he is a god, and legends speak of him accordingly.

Another possibility is the dread Prince of Tears, certainly the most powerful creature described in The Lost Citadel, an undead monstrosity that feeds upon fear and despair. If not the Dark Lord, then almost certainly the Prince is the Dark Lord’s lieutenant, perhaps providing a useful stalking-horse for the real Dark Lord of Redoubt.

Whoever or whatever the Dark Lord may be, since the Mists have reduced the domain to just Redoubt and the leagues of forests and hills beyond its walls, this also means the Dark Lord is far closer to the Last City than anyone imagines. If the characters are from Redoubt, do they discover the existence of the Mists and that what is left of their world is adrift as a domain of dread? If they are travelers, do they dare reveal the truth to the desperate and hopeless people of the Lost Citadel? What will become of Redoubt and its people if they do?

While the whole of The Lost Citadel setting and background is usable as a Domain of Dread, not all of the rules and options in the book are the same as the core 5e classes, ancestries, and spells. Game Masters will need to decide what parts of the graves to loot, as it were, and what to leave behind. Some possibilities include:

Ancestries: The ancestries from The Lost Citadel—dwarf, elf, ghûl, and the various human ancestries—can serve for characters from the domain and those travelers in the Mists meet there. Decide if the Woe system (following) from the setting applies only to those from the domain, to everyone there (including visitors), or is something you prefer to ignore in the context of the Domains of Dread—or even export to other domains.

Spells: Speaking of spellcasting, while magic is poor and limited in Redoubt, stay with the standard 5e abilities for spellcasters. Whether they are natives or visitors, it means they are extraordinary individuals, likely subjects of awe and trepidation, and perhaps no small amount of jealousy. They’re also certain to draw attention from the dread and woeful supernatural forces of the Dead. The magical limitations of the Domains of Dread still apply, of course.

Magic Items: The new magic items found in Lost Citadel suit the setting well and can be found in and around Redoubt. Some of them may have even found their way through the Mists to other domains in other hands; things like the potion of deathless steps or a rest-bringer weapon are likely to find use in many realms.

Monsters: As Lost Citadel notes, many 5e monsters are found in the domain and it offers some guidelines for customizing them. The new monsters in the book are found in and around Redoubt, and may appear in other domains or on other worlds as well. Heroes who visit The Lost Citadel and somehow manage to escape and return through the mists to their own world would do well to look for signs that the unquiet Dead have followed them, that the Fall that destroyed Zileska could be as contagious as the plague that first made the Dead rise….

Woe: The Lost Citadel includes a system of Woe, the creeping, spiritual corruption of the realm beset by the unquiet Dead. It is certainly a game system that would import well to other horror realms, or is something you could set aside in a Redoubt in the Mists, using 5e systems from the Guide to Ravenloft for fear, curses, and dark gifts and bargains in its place.

As it happens, The Lost Citadel Roleplaying, is DrivethruRPG’s Deal of the Day! You can get the PDF for 50% off for the next 24 hours!

Ships of the Expanse: Torpedoes Away!
Scroll to top Skip to content