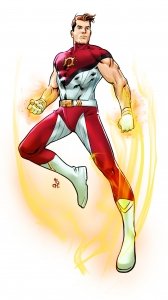 Ray Montoya was the kind of guy who could make Mount Rushmore crack a smile. Making others laugh, especially with a little self-deprecating humor or a harmless prank, felt like the one thing in the world he couldn’t screw up, and he leaned into it hard. Ray wasn’t trying to develop superpowers on the day of the eclipse. He was trying to show off to his friends. But with all the warnings on TV about not looking directly at the eclipse—as if anyone could be that stupid—he couldn’t resist the opportunity to play a little prank.

He met up with his friends on a rooftop patio for the viewing and prerequisite party. When the time came, and everyone pulled out their eclipse glasses, Ray simply whipped out a pair of designer shades. “These should be enough for me. I’m already a star.” He pushed the shades up his nose and turned his face innocently to the sky.

He grinned as his friends started freaking out, shouting at him not to look. None of them could see his eyes were closed behind the sunglasses. Ray was dying of laughter on the inside, right up until a server with a tray full of glasses tripped and crashed into him.

Ray’s eyes popped open. Without meaning to, he stared directly into the glorious eclipse, and it burned him. As if entranced, he reached up and removed his sunglasses, staring fixedly at the stunning astronomical event. A few seconds later, one of his friends spun him around, yelling for Ray to not be an idiot.

To everyone’s shock, Ray’s irises had turned pitch black, surrounded by metallic gold sclera. It was if the eclipse was burned into Ray’s own eyes. The sun still glowed bright in his vision, and then in his chest.

Since that day, the power of the sun shined within Ray’s body. He learned to control the bright yellow-white light that shot from his fingertips, and he also developed the ability to fly. Sometimes Ray still wonders how he gained superhuman powers from a solar eclipse, especially after news reports began mentioning other people who looked into the celestial event and only walked away with retinal damage. Some days he feels like the luckiest guy in the world, but other days beats himself up as a fraud, sure that his powers were intended for someone else who could’ve used them better. That lingering doubt drives him to better master his powers as his body continues to change.

What didn’t change was Ray’s showoff nature and desire to impress people. He loves being the first on the scene and taking out bad guys in the flashiest way possible. When the news vans show up, Ray’s always willing to linger for an interview. Given his ego, Ray couldn’t abandon his real name entirely. Instead he adapted it to create his superhero identity: Solar Ray.