We’ve got one day left on our Sentinels of Earth-Prime Kickstarter. If you haven’t backed it yet, head over to Kickstarter and check it out. It’s a cooperative card game that takes place in the core setting of our Mutants & Masterminds RPG and uses the excellent Sentinels of the Multiverse rules by Greater Than Games. The great news is that the Kickstarter funded in nine hours and now has topped $135,000, so we will be making Sentinels of Earth-Prime for sure and we’ll have the resources to produce the first print run up front. That really is one of the best things about Kickstarter from a publisher’s point of view, so if you are a backer, thanks for making it possible. Today I thought I’d share our long-term plans for Sentinels of Earth-Prime because we aren’t just launching a game here, but a game line. Let’s talk about what that means and how it relates to Mutants & Masterminds. 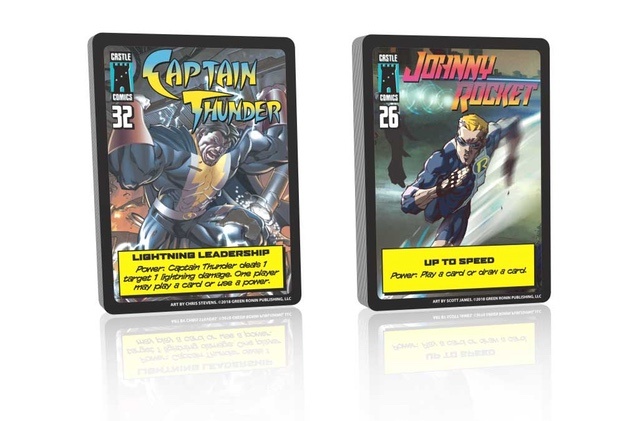 The first step is, of course, making the core game and the mini-decks that are part of the Kickstarter. Those are scheduled to ship to backers in April of 2018. We’ll then release them into stores, as we value our partners in retail and distribution and want the game to reach the widest possible audience. This should get Sentinels of Earth-Prime out just before summer, which is convention season for the game industry. We can thus run demos and promote it at important conventions like Origins and GenCon. This should all make for a strong rollout and help establish Sentinels of Earth-Prime as a worthy successor to Sentinels of the Multiverse.

What’s the next step? Expansions, of course! The way we’re designing the core game, it tells the story of key events in the years 2002-2006 of Earth-Prime, most notably the Grue attack on earth and Omega’s invasion of Freedom City. From there we have two boxed expansions planned. The first will advance the timeline to 2012, covering the Silver Storm in Emerald City and related events. The third expansion will bring the timeline up the present day, and include elements from The Cosmic Handbook and the new edition of Freedom City. Our plan is to do one release a year for the line, so the core game in 2018, the first expansion in 2019, and the second expansion in 2020. We may do additional mini-decks along the way. Certainly, we have plenty of characters to work with! Over the past 15 years, we’ve published literally hundreds of heroes and villains from the Earth-Prime setting, and more are on the way.

Mutants & Masterminds, the roleplaying game that birthed the Earth-Prime setting, will of course be continuing its run concurrently with Sentinels of Earth-Prime. The long-awaited third edition of the Freedom City sourcebook is coming out next. It’s in layout now and should be going up for pre-order by the end of the month. After that is a new print collection of the Rogues Gallery series of villains, which will include some all-new content, because you can never have enough villains in a superhero RPG! We round out the year with the launch of the Mutants & Masterminds Basic Hero’s Handbook. As the name indicates, this is a beginner friendly entry point into the Mutants & Masterminds RPG. If you’ve never played M&M before, it’ll be a great place to start.