Society is in chaos, a city is born, and Europa needs heroes!

One of the most amazing things about starting Mutants & Masterminds Mondays and the M&M Patreon is our ability to hear directly from the fans about what excites them. The alien refuge city of Starhaven has been a setting element since the release of the Cosmic Handbook back in 2015, but aside from supporting details and the local villain, Null, in the SuperTeam Handbook, it has largely existed as a bit of background flavor.

But everyone was thrilled by the setting when our new designer, Alex Thomas, ran a live play adventure set in Starhaven for the Green Ronin staff. Fans were excited! We were excited! The shanty-singing robot pirates were excited! In the new Mutants & Masterminds Monday we even joked about making a Summer of Starhaven event and you told us you loved that idea.

So here we are, ready to kick off the Summer of Starhaven! 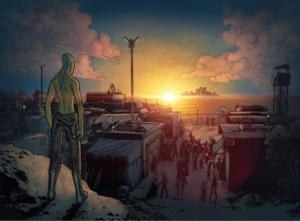 We’re going to spend the summer of 2021 using the M&M Patreon to detail the fledgling city of Starhaven, a refugee colony on the nearby moon of Europa, into a full-fledged campaign setting for your Mutants & Masterminds game. It’s a community make up entirely of refugees carving out new lives in the ruins of an ancient Preserver ruin, dealing with political strife, differing cultures, overzealous oversight, and sinister factions looking to exploit the chaos—the sort of city that needs heroes!

But this isn’t going to be a straightforward campaign setting. We’re going to involve our patrons, casting you in the role of alien refugees who help shape the flavor of the city. You’ll vote on the city’s government, the regions the book explores in detail, and design a villain for the city as a whole group! We’ll post monthly articles delving into bits of Starhaven lore, and after the summer ends, we’ll collect and expand everything into a new book: The Guide to Starhaven, which includes all the patreon material and Alex’s Siege of Starhaven adventure to get your alien heroes started protecting their new home! Patrons will get a discount for all their help on the project, but the Guide itself will be available to every Mutants & Masterminds fan as a supplement for your own Earth-Prime campaigns!

The Summer of Starhaven will last three months—June, July, and August—so if you want to make your voice heard and help shape the city as it forms, tune in to Mutants & Masterminds Mondays and join the M&M Patreon!

Ships of The Expanse: Expanding How You Play
Scroll to top Skip to content