I really enjoyed writing Lost Ilium the other week. I didn’t know if the mashups were going to be a series, but I left room for it. Past Me was pretty smart it seems because I quickly came up with another idea. This time, we’re going to combine Blue Rose, Modern AGE, and cartoons from the 90s. Unfortunately, I liked this one so much that I went overboard with the setup. It’s going to be a two-parter! 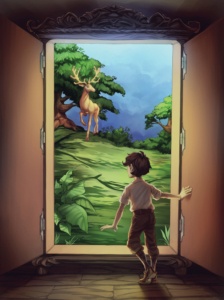 Ingredients: You need Blue Rose: The AGE Roleplaying Game of Romantic Fantasy and the Modern AGE Basic Rulebook. The Modern AGE Companion, Aldis, City of the Blue Rose, and Envoys to the Mount (preorder hardcover, but the PDF is already available) are also helpful.

The Blue Rose was a weird show, all right. Nobody agrees how many episodes there were, whether it was 2 or 3 seasons, or even who made it. The voice actors don’t appear on IMDB, and nobody’s heard of Magic Deer, its supposed animation studio. TBR ran on dozens of local stations in syndication. Each station has spotty, even contradictory records of what they broadcast, back when people clearly remember them showing episodes: reliably from 1991 to 1993, then in occasional bursts before finally vanishing by 2000. Everybody reports different times, though many swear it came on right after Cybersix, though not on the same station.

Some people got TBR shirts and tchotchkes in the mail after writing Magic Deer’s PO Box. Some swear they bought action figures in one of those big box stores. You can find some stuff cheap in antique stores—a bargain since it’s impossible to tell if the stuff is authentic, and most dealers don’t know the show anyway.

The 90s, with its triumphant conservatism, resurgent fascism, and an LGBTQ+ community reeling from the Right weaponizing a deadly disease against them, was demoralizing, even dangerous for some of us—and its problems sound familiar again. It was almost a lifeline. We needed it then, and it appeared for us. Funny thing about TBR Fandom: You didn’t have to be queer for the episodes to appear on your screen but given who shows up at Envoycons (“The only conventions featuring none of the cast and crew!” is our slogan), that seems to have worked better for reception than either cable or the ol’ rabbit ears.

Maybe that’s why it’s back.

Before I continue, let me talk about the show.

TBR is named after the secret identity of its main character, Ala Rose. Ala was one of us: a teen trying to live in this world. The origin is in the opening credits. Bullies chase Ala down an alley. They jump through an ornate blue door with Ferrus, their Ferret (I know, but it’s a cartoon, remember?). On the other side, Ferrus wakes Ala up by speaking into their mind! And they look around to see luminous woods on another world! Ferrus is an intelligent creature called a rhydan, from the new world, Aldea. He was an Envoy, agent of the good realm of Aldis. When he crossed over to Earth, he could barely remember his own name, and had to rely on instinct—and that’s how he found Ala, the prophesied Blue Rose.

In the first episode, they set it up fast. In the capital of Aldis, the Queen explains that the Blue Rose brings the Great Symmetry when it’s truly needed. The Queen gives Ala the sapphire-studded mask and sword of the Blue Rose persona, which allow Ala to take on a masculine or feminine secret identity. (The show never tells you what Ala’s gender or chromosomes are, and fans argue about it a lot, but I think the show did that on purpose and don’t care either way, myself.)

The secret of symmetry is that while the Exarchs, evil beings, say that love and hate are a balance, hate is the real imbalance. True symmetry balances the varied ways of love by allowing them to flower. Every just, passionate, and kind emotion is part of the Great Symmetry. The Blue Rose’s job is to uphold them all. Maybe that’s why the show wasn’t much of a hit. It had the adventure people think only boys go for, and the emotional focus only girls’ shows used to have.

Anyway, Ferrus uses his mind magic to fight beside the Blue Rose, and Ala meets a bunch of recurring Envoys, who become allies, rivals, romantic partners—or all three. The Blue Rose swings between a “town of the week,” dealing with classic community squabbles (that invariably have some evil sorcery exaggerating them, but I think this explanation was for the kids) and an ongoing battle against the evil nation of Kern, whose lich-king wants to…well, do the classic dark lord thing, serving the Exarchs. Sometimes, Kern agents are responsible for town-of-the-week troubles. It’s not the most nuanced setup but hey: kids’ cartoon. They do showcase other countries and peoples from time to time, either as a lesson in tolerance (see “The Roamers,” where the Blue Rose deals with people mistreating a group of nomads) or as a not-too subtle commentary on current affairs (all the episodes taking place in just-like-Fundamentalist Jarzon).

Between fragments, possible unreleased leaks, and definite episodes gathered by the fandom, we got at least 32 and possibly as many as 48 TBR episodes, including the annoying season finale—a two-parter ending in a cliffhanger! Ala leads a revolution against Kern and is about to do battle with Jarek, the Lich King, Herald of the Exarchs….

…and that was it, until now.

Now comes the hard part. Have you had the dreams too? Have you seen the fanvids? You have to.