Yes, Modern AGE is available for print pre-order! This means you can also order the PDF immediately, either on its own, or with your book as part of Green Ronin Pre-Order Plus program. Tell your friends! Post on websites! Don’t believe every placeholder date you see posted in Amazon and vendor sites! Even as we speak, the game is in the queue to go to press.

It’s been a trip, from turning the slate of ideas (modern and classless, with some character creation structure provided by Chris Pramas) into a testable, then finished game. I didn’t want to just add guns and technology to Fantasy AGE. To produce an implementation of the Adventure Game Engine that fits the period, we developed some basic design principles. I’ve talked about these before, but since the game is out, I don’t mind going over them again. After that, I’ll talk about where we go from here.

Consequently, we developed new systems and stunts to support the three areas. Chase rules expand what’s possible in an action scene and can apply to chases on foot or horseback as well as in vehicles. Breaching and investigations support capers and procedural stories. For social interaction, we made relationships and memberships, first introduced in early AGE games, core parts of Modern AGE. 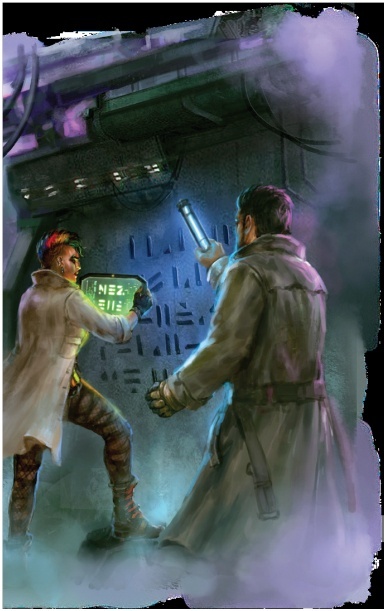 Indra and Jeff perform a classic adventure task with new tools. That’s one way of looking at Modern AGE.

Modern AGE goes all-in with stunts. Stunts are a distinctive feature of AGE. They perform tasks other games often handle with dedicated subsystems. Grappling and other special combat maneuvers are dealt with here. Instead of using Health points, vehicles get damaged through a special slate of stunts.

The emphasis on stunts requires a change in how players should approach them. Stunts are organized into focused lists, and we’ve expanded how many are available. While any character can use any appropriate stunt, we recommend picking your favorites, including stunts modified and improved by talents and specializations.

The three game modes—Gritty, Pulpy and Cinematic—let you modify rules to fit the genre which best suits your campaign. I’ve talked about this in prior Modern Mondays, including last week. Mode most notably affects how characters resist damage with Health and Toughness, but also influences stunts, chases and even Resources.

Getting into the Game

The Modern AGE Basic Rulebook includes everything you need to play the game, including an introductory adventure designed with fantasy and science fiction options, should you wish those to be part of any subsequent campaign. In addition, Freebooter Game Masters at Origins and Gen Con will both be running “Warflower,” an adventure with similar variation.

Want a taste of Modern AGE before you get the core book? The Modern AGE Quickstart features a cut down Cinematic mode rules set, pregenerated characters, and a modern fantasy adventure.

Further along the line, we have several other books at various stages of completion. The one we’ve announced is the Modern AGE Companion, which has just finished editing. This book presents many, many new systems you can use to adjust the game for the genre or feel you prefer.

See You in a Bit

With the core book out, it’s time for me to give Modern Mondays a rest for a little while. I’ll be back from time to time, to talk about upcoming releases and other projects. I’ve talked your ear off about Modern AGE, but I’ve got another game coming: Ork! The Roleplaying Game, Second Edition. See you around!