Hey folks, Jack here. Long time no Round Table, but we’ve been busy on wrapping the Campaign Builder’s Guide and preparing for the push to finish Lairs, our next book after that for Fantasy AGE.

Now originally I had intended to do the third Iconic character from our “core three” heroes featured on our covers and such. And I will do that. However, a discussion with Vigilance Press head James Dawsey about his FAGE campaign got me thinking about a particularly utilitarian entry utilizing the Fantasy AGE Companion and Fantasy AGE Bestiary. In particular I wanted to discuss Minion rules and how they work with various creatures, but the decisions and analysis here are similar to the thought processes for other parts of the Play Options chapter of the Companion, such as the mob rules.

The Companion has Minion rules for disposing of some creatures as a minor threat. This is represented by a Minion Rating, which is the amount of stunt points (SPs) you can use to automatically defeat an adversary. You can even use this to dispose of multiple minions if you have the points, making it possible for skilled heroes to slaughter lesser foes.  The rules are discussed in more detail in the Companion, but that’s how they basically work.

Now the idea behind those rules is that GMs would assign a Minion Rating based on their needs. For example, goblins might be rated 1 or 2, based on how little a threat they are in a campaign. A high-powered game might give Minion Ratings to giants or other powerful foes, while they are never given those in lower-powered games. However, its also true there are certainly general niches and impressions many Minion type adversaries fall into in most campaigns while other adversaries might use these rules in very particular and unusual—but still valid—ways.

With that said, let’s look at some Fantasy AGE Bestiary creatures and look at how they interact with Minion rules.  I hope this is helpful to those seeking to use these rules in their campaigns. 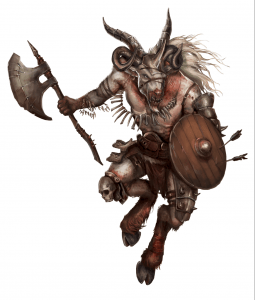 These adversaries all fill the “dangerous in large groups, makes great minions for boss monsters” category.  That makes them good candidates for Minion Rating 2. They can be disposed of with some strong attacks, but with some luck you can take down some extras along the way. In high powered campaigns? Drop these down to 1 and watch them fall. Or perhaps make them Mobs and then give the Mobs a Minion Rating—you heard it here first—for games of heroes who can cut down armies like a Fantasy AGE version of the Dynasty Warriors video game franchise.

So Chimera don’t usually have Minion Ratings. They’re singular threats and tough. However, you could give their various heads a Minion Rating and then link some of their special qualities to these heads. Hit a “Minion” on the Chimera and they lose their dragon head and its breath or some other part. Other multi-limbed or headed adversaries could be similarly handled. These heads would likely be hard to hit, akin to a Lethal Blow stunt (5 SPs). Thus it would make sense to have these heads be Minion Rating 5.

A bit tougher than the above Bouda and company, they usually have Minion Rating 3, meaning a truly epic Stunt can take out two, but they’re still a threat.

Gargoyle Minion Ratings should be set at around 4. This would be the equivalent of using a Mighty Blow and Pierce Armor to bash through their stone-hard skin with a disabling blow.  Sometimes the adversary suggests a stunt or combination of them which would “finish them”. This makes a good model for a Minion Rating.  In these cases, GMs will to do a bit more bookkeeping might offer a discount to a character who has one of the stunts that go into such calculations, making it easier for them to cut down certain Minions. However, this is another thing to keep track of, so its not for everyone.

Its worth noting these adversaries are more dangerous in water. Mostly this is because they are at home in this environment where most characters suffer penalties. However, if you’re making aquatic minions? Consider making them with two Minion Ratings, one for out of water and one for in. In this case of these foes? 2 out of the water and 3 in the water makes sense, though you could remove the rating entirely underwater if you want to reinforce how important it is to face these foes on your own terms to ensure success.

Reapers generally shouldn’t have Minion Ratings. But what if their ability to mark others for death allowed them to give someone else a Minion Rating? Thus a character marked by a Reaper could be cut down by the creature more easily.  This would also be a way to simulate a “death curse”.  However, be extremely careful using this concept on PCs and if you do make sure they are taken to 0 health and in danger of death by this, allowing them some way to survive.

Vampire Thralls might be Minions, representing how they are sometimes disposed of easily in fiction even as the Vampire Lord is a major threat. This is somewhat represented already with its Hard to Kill special quality, requiring a Lethal Blow stunt to stake or behead them once they have reached 0 Health. However, making these creatures Minions makes them more fragile, doing away with the requirement to reduce their health. In this case, a Minion Rating of 5 is appropriate, the same SPs you’d need to use a Lethal Blow to finish them in their non-Minion state.

That’s just a few examples, but it shows the variety of ways the Play Options rules from the Fantasy AGE Companion can intersect with other books in the line.