Not every Modern AGE adventure has to be deadly serious, and last year I was charmed when the streamers of DicePriori ran a one-shot based on the infamous “30-50 Feral Hogs” meme. It looked like so much fun that I asked DicePriori members Chase Schneider and Matthew Foreman to write the adventure out for me as a Modern AGE Mission:  next in a series of unconventional and/or setting-neutral PDF adventures for the line. The first in the series, Warflower (also available at DriveThruRPG) was a choose-your-own secret romp through medieval-style sword fighters, drug-dealing alchemists, and corporate perfidy. Feral Hogs’ claim to fame is that it was ripped from the headlines of…well, 2019 (stupid COVID-19 delays) and set in a post-apocalyptic fever dream of big trucks, guns, distribution centers turned fortresses, and nuclear reactors. If it had a genre, it would be “memesploitation.” Look for Feral Hogs this week! 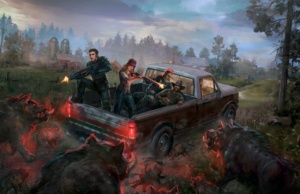 But speaking of memesploitation, how do characters in Modern AGE use memes? In a past Threefold campaign one of the PCs got their Twitter account verified, so I know from experience social media plays a part in contemporary campaigns. In most games the Click “Share” stunt in the core rules works well, The Modern AGE Companion’s Influencer talent and Communicator specialization are the power duo for social media, but anybody can make a meme (or grow one from an opportunity, like the original Feral Hogs Twitter blow up), and this being Modern AGE, the ability to make a meme naturally implies Meme Stunts!

A meme is an idea expressed in some rough form (an image, or a video, or…well, it’s 2020, we know what memes are) that people feel compelled to share. To make a meme on purpose requires a Communication (Expression) test, with a TN determined by the reach you want it to achieve:

Sympathy Likes—TN 10: You want to amuse your social media connections who will at least pretend to think the meme is clever.

Community Appreciation—TN 14: You want that meme to spread across a significant scene of people, like backpackers or miniatures gamers.

Mass Culture—TN 18: You want the meme to be known to a vast section of people.

You can also strategically share a meme (with good timing, a good venue, and maybe a witty addition or two) but this puts you on the periphery of its hottest social media action. Generally, sharing an existing meme has the TN and effects of creating a meme of one rank less, so piggybacking on a Mass Culture meme has the TN and effects of an original Community Appreciation Meme. Sharing a meme worthy of Sympathy Likes is useless. Sorry.

A meme’s main practical effect is to strengthen your social media reach by amusing and increasing the number of followers you have. This provides a one-step Attitude shift in the direction of your choosing about the target or subject of your choosing among the audience you aimed for, though this is short-lived, lasting just 3d6 days. Furthermore, you can use the following Meme Stunts!

3              Actual LOL: Your meme is sweet enough to provoke a real reaction. You shift your targets’ Attitudes an additional step up or down.

4              Cash Me: Your improved social media reach translates into money from a hustle you promote, or a simple appeal for money. You gain +1 Resources for 1 week for Sympathy Likes, 1 month for Community Appreciation, and 2d6 months for Mass Culture memes.

5              I AM the Senate: 1d6 weeks after your meme launches, an online community forms to talk about it and make related memes. If you contact this community it automatically confers 1 rank of Membership on you. The community is one size smaller that the scope of your meme, unless it’s a Sympathy Likes meme, in which case it’s just a handful of people.