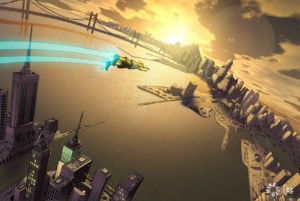 Assault on the Nerian Nexus is out and ready to run your heroes through the gauntlet! And while it’s packed with excitement featuring your favorite Freedom City baddies, an observant fan of our weekly Mutants & Masterminds Monday livestreams raised an excellent question: How do you jump from our previous adventure series, Emerald City Knights, to the events of NetherWar if your group wants to keep the same lineup?

There’s nothing saying you can’t just transplant the personalities and histories of Freedom City directly to Emerald City. Like any comic book series, simply give your heroes a few “villain-of-the-week” style adventures as a palate cleanser, then you can lead right into the events of Assault on the Nerian Nexus. But Freedom City and Emerald City have very different themes and casts, and with the events of Emerald City Knights delving so deeply in the west coast city’s obscured history and establishing the new status quo, you might want to recast the events of NetherWar to fit the west coast flavor.

Re-inventing the NetherWar adventure series to fit Emerald City requires a little more legwork if you really want to lean into the charm and mood of the city established during Emerald City Knights:

Freedom City’s is inspired heavily by the long comic book histories of major publishers. It’s a melting pot of silly and serious, combining many genres of superpowers and comics with an eye more toward earnest heroics as the unifying theme. Emerald City, with its deliberately concealed history and modern, tech-oriented power boom, is more rooted in modern film and television, drawing inspiration from television shows like Heroes and movies from the new cinematic takes on classic comic mythologies. These sources look for a common and scientific (or believably pseudo-scientific) origin to superpowers and often ignore magic or else describe it like a scientific force not yet entirely understood.

You as the Gamemaster need to decide if you want to keep the original magical overtones of NetherWar, or convert it to one of the power archetypes more commonly seen in Emerald City, like aliens or psychic ability. Rather than use NetherWar’s existing big-bad, you could use a powerful psychic like Koschei or the Cosmic Mind—who has become disembodied and is now trying to merge with the collective human unconscious to rule the world! Alternatively, you might run NetherWar as an extension of Emerald City Knights, with many of the magical threats being replaced with technology and nanites unleashed by Tellax as the alien robot continues its quest to transmute the Earth into a cosmic weapon.

The events of NetherWar turn heavily on the actions of Adrian Eldrich before his death, with his old foes re-emerging to threaten the world now that no Master Mage opposes them. If you stick with a magical theme to the series, you’ll need to decide if Adrian Eldrich operated out of Emerald City and left much of his legacy there . If not, you’ll need to cast a replacement. With the Fraternal Order of Evil deliberately concealing much of the city’s superheroic history, it’s entirely possible another powerful mage made their home in the city, and whose legacy was forgotten and stronghold lost upon their death. In this case, it isn’t wards keeping villains from plundering the Nerian Nexus (or whatever you decide to call it), but simple ignorance. The gold rush to reclaim the lost treasures might begin when a Silver Age villain like the original Mad Machinist might babble about the lost stronghold in their old age, or the rediscovery of another Silver Age lair like that of Guild of Justice headquarters in The Reign of Cats and Dogs might point heroes and villains alike to this lost trove of magic.

If you instead decided on a theme other than magic, you’ll need to pick histories and locations to replace the magical ones featured throughout the NetherWar series. The Nerian Nexus might instead be a secret Ghostworks of Majestic-20 lab or a Preserver ruin hidden in the Atlas Mountains or deep below the Pacific Ocean. Peruse the Emerald City sourcebook for inspiration and don’t be afraid to create your own lost legacies in Emerald City to explain the how and why of strange locations.

To round out your Emerald City remake of NetherWar, decide which villains from the original adventures you want to keep and who you might re-cast with Emerald City natives.

The menacing Madame Macabre makes an excellent substitute for Medea. While nowhere near as ancient and a good deal more sarcastic, Madame Macabre is still bitter at the world failing her and relies as much on trickery and manipulation as she does brute force to get what she wants. For more powerful magical opponents to replace Malador in later adventures, you might look at Doctor Azathoth or Professor Jackanapes, or the chaos goddess Eris might insert herself into events to complicate everything. The obsessive collector of secrets Arcanix might stand in for Warden, while Toy Boy’s role as the ever-loyal spy might be replaced by another terminally-ill villain like Doubletime or Mosquito.

You can round out your gallery of rogues with magical adjacent villains, such as the Looking Glass Gang and various magic-themed Stormers like Chain, Epiphany Jones, Ghostlight, Lord Etheric, and Silver Sorcerer.

In the end, Astonishing Adventures are tools to help you and your group have a good time. Take what you like, replace what you think will work better, and otherwise customize the adventure to fit your needs!

All the villains and organizations in this post can be found in the pages of the Emerald City and Threat Report sourcebooks.

What Even Is Time (Travel)? (Ronin Roundtable)
Scroll to top