Being a game designer means being a tinkerer, and even as you develop a new game, a part of you thinks “this would be perfect for this other game I want to run…” And so I think every AGE book, regardless of the line, is a stealth toolkit for Gamemasters. At least that’s how I went into designing World of Lazarus. While most of the new player backgrounds, for example, have in-world flavor, they are easily adapted to almost any Modern AGE campaign. Minor Family can be translated to “Scion of the 1%” while Herd Worker makes a dang good “Rust Belt Burnout.” Most of the talents are ready to pop over to any Modern AGE game as well (with GM permission, naturally). Except…

What to do with Minor Augmentation and the various Lazarus talents? 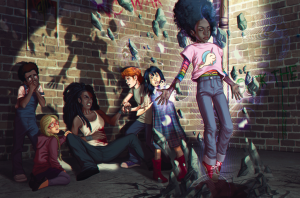 The four flavors of Minor Augmentation are built to balance with other talents, and you can always pop them into your otherwise mundane Modern AGE game as “Savant” or something similar: extraordinary but entirely natural abilities a character might be born with that set them apart. In this case, you might want to limit a character to only one Minor Augmentation talent and eliminate the story idea that minor augmentations need regular maintenance to keep functioning (or cause other occasional drawbacks).

The Lazarus augmentations don’t work quite as well as natural abilities. But man… do they work great for a variety of unnatural abilities! As we talked about a few weeks ago, the Lazarus talents represent a wide variety of improvements, from gene-splicing to drugs to cybernetics, and you can use them to reflect any of these options in your own home-spun campaigns! Want to do a gene-punk game where splicing is the new tattooing? Want an urban fantasy game where every PC starts with the blood of something unearthly in their veins? Lazarus talents can even represent temporary abilities PCs get from alien symbiotes, powered armor, or esoteric talismans.

Whatever use you find for Lazarus talents, remember that they offer players a power boost over mundane talents, and so they should come with an appropriate in-world drawback. In World of Lazarus, the setback is story-based: to possess a Lazarus talent, a PC must (theoretically) be a Lazarus. They are at the beck and call of their Family, and rely on their Family to maintain their extraordinary bodies. Loyalty is programmed into their DNA, and disobedience means death. Your own campaigns may impose similar constraints on PCs with Lazarus talents: they might need to remain loyal to a powerful figure to maintain their talents, or need expensive drugs or equipment that constantly push them to take dangerous jobs. They might instead have a more mechanical drawback, such as imposing a level of fatigue whenever the PC uses them in a scene, or requiring a PC to spend Power Points to activate it. It could open up weird new gameplay options: Lazarus talents might represent high-end cybernetics that need maintenance and can be hacked, introducing a minor story cost and a weird mechanical vulnerability.

There’s no perfect way to adapt new rules into your campaign, so play around and see what feels a little too good in play and what seems just right. Make sure your players know the rules might be in flux, and be willing to listen to their feedback as well. If they like the rules even if they seem a little much to you, always remember your NPCs can use them too!

OH! And my personal campaign idea? Roll Lazarus talents in with psychic powers and let my players go mind-diving into weird psy-scapes, Psychonauts-style!

The Expanse: Character Creation!
Scroll to top Skip to content