Hey, I knew I was going to have to toss a listicle in this series of articles about Threefold, our new, original Modern AGE setting, but better to get it out of the way now instead of leaving it for the dregs, right? If you’ve been following along, you know Threefold takes place in the Metacosm, which includes myriad planes of existence, from fantasy lands to alternate Earths, connected by gates. There’s a lot of room for weirdness. Here are ten examples. 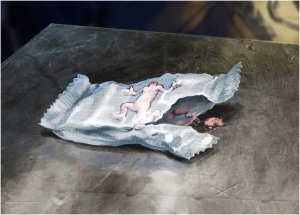 Self Pork. Not just good, but good for you. Headless clones only, guaranteed!

A life support cannister containing the cloned brain tissue of a mystic who has recited poetry and prose praising science and technology. A properly deployed Cantor mitigates the effects of Incessance, a phenomenon that makes high technology less reliable on certain planes.

Erasing an alternate timeline by destroying all intelligent life and sealing it off. One of the duties of Aethon, prime Earth’s transhuman intelligence agency, though they’re not always sure why they have to do it.

A new discipline in science and engineering in the Haqida Technocratic Republic, a pan-Mediterranean state in an alternate Earth where the Abbasid Caliphate persisted and spawned even more influential successor states. Engrammatry creates physical phenomena through pure computation—reality out of math.

A fully immersive MMO that allows players to inhabit synthetic “heroes” called Wayknights in the Otherworld of Wartorn. Astrally projected instructions from the player’s rig control their Wayknights, which are themselves relics of a lost civilization. Many normal people also live on Wartorn and fear the bloodthirsty Wayknights.

A digital-psychic cryptocurrency rendered unhackable due to a causal interaction with the Titan Core, a future transcendental AI. A Krypt must sync with a physical component, such as a coin or tattoo (the latter has made the skins of certain individuals extremely valuable). The primary currency of the Krypteia, a multiplanar crime syndicate.

A gray market medical foodstuff made of the purchaser’s cloned tissue, prepared as jerky and given a little engineering along the way. Eating self pork made of…well, yourself…instigates rapid healing. The most trusted brand, Choppy, is named for its mascot, who’s got no head and two thumbs up.

The universal language, known to wandersouls, those individuals capable of easily perceiving transplanar gates. When one knows Shabda, most languages are translated into and perceived as one’s first language, with occasional unusual nuances, such as posh aliens acquiring comparably posh British accents.

Creatures who live in floating cloud lairs on the Otherworld of Brylancie. Their aerial battles are responsible for all weather and atmospheric phenomena, so local humans try to appease them by leaving fresh meat out for them at night. Brylancie’s moons are sky naga eggs; their numbers change every few decades. Fallen moon shell fragments are worth their weight in gold.

Agents of Aethon capable of attuning themselves to their alters, or alternate timeline selves. Shattersouls are valued as deep cover operatives, as they are able to intuit the ways in which a given Earth deviates from the primeline. However, shattersouls are “spread thin,” psychically speaking, and this lowers their resistance to possession and sometimes transfers traumatic memories from alters.

An enchanted firearm capable of sustaining a Relationship (as per Modern AGE) with the user, though this makes said users seem somewhat remote when it comes to dealing with people. Soulguns are particularly favored by arcannoneers, who master channelling magical energy through these and other firearms.