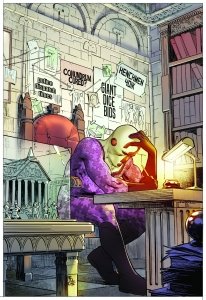 In our last Mutants & Mastermind’s Deluxe Gamemaster’s Guide preview, I showed off some of the new faces populating the game, including my beloved Jobber villain archetype. But the Deluxe GMG is more than just a new gallery of rogues! One area I’ve struggled with the third edition of Mutants & Masterminds has been adventure design. The original Gamemaster’s Guide delved deep into villains and plot and motivations and challenges, but never provided a chapter on stitching them all together into a full adventure.

So for this newly revised reprint, I added a chapter on exactly that! The new Adventure chapter provides some practical advice on planning an adventure, involving the heroes, and stitching together various scenes to help make compelling adventures with more to do than throw punches and busses. Mutants & Masterminds has roughly broken out the action into various “scene” types—Conflict, Challenge, Investigation, and Roleplay—for years in our official adventures without expanding much on what each of those scenes mean or how to make best use of them as a GM. Now each scene type gets a spread on how to write it, how to use the rules, and when to dish out Hero points, as well as a helpful random chart to help out if you get stuck.

The Adventure chapter also includes a half-dozen pre-built scenes for you to grab and drop into your own adventures on short notice. Anyone who picked up the Basic hero’s Handbook will be familiar with these, but if you haven’t, a pre-built scene has everything you need for an hour or two of interesting heroics above and beyond the beloved superhero slugfest. The scenes also show you how to use the Mutants & Masterminds rules in unexpected ways to play out some fan-favorite comic book tropes. The new scenes in the Deluxe Gamemaster’s Guide include shrinking your heroes down to insect size, handling massive invasions, and waging battles in the psychic realm, but my favorite is detailing how to play out a fun, high-speed chase!

You can download a PDF sample of the High Speed Chase right here!

Of course, we wouldn’t leave you hanging with only a few sample scenes. Your group needs to save the day in more than just one scene at a time, so the Deluxe Gamemaster’s Guide includes two new Mutants & Masterminds adventures. In “Power Play,” a new criminal organization is taking over the streets of your fair city and threatening to bring one of the most dangerous supervillains of the previous generation back into play to secure their hold. In “The Isle of Dr. Sersei,” you must infiltrate a mad scientist’s island full of monsters to stop her deadly “salvation” of mankind. You can run each adventure as it is, drop in some of the sample scenes from Chapter 6 to bulk it out, or just use each adventure as a whole pile of extra sample scenes to drop into your own adventures. Maybe you’ll never run Power play at home, but knowing how to run the PCs infiltrating an underworld meeting or battling atop speeding tanker trucks is always fun to have in your back pocket! 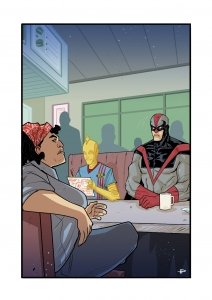 Getting Started with Threefold
Scroll to top Skip to content